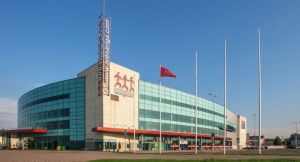 Arena Riga (Arēna Rīga in Latvian) is a multi-purpose indoor arena in Riga, Latvia. The arena was opened in 2006 and was designed by SCI Architects, a Canadian company, together with Latvian companies SIA Merks and SIA Nams. It was built as one of the venues for the 2006 IIHF World Championship and is primarily used for ice hockey, basketball and concerts. The arena can hold anywhere between 10,300 and 14,500 people.