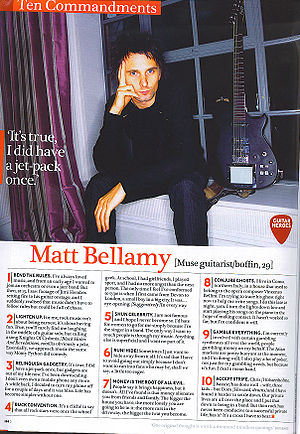 1 | Bend the rules. I've always loved music, and from an early age I wanted to join an orchestra or even a jazz band. But then, at 15, I saw footage of Jimi Hendrix setting fire to his guitar onstage, and I suddenly realised that music didn't have to follow rules but could be full of chaos.

2 | Lighten up. For me, rock music isn't about being earnest, it's about having fun. True, you'll rarely find me laughing in the middle of a guitar solo, but calling a song Knights Of Cydonia [Black Holes And Revelations, 2006] is obviously a joke. Essentially, we approach music the same way Monty Python did comedy.

3 | Relinquish gadgetry. It's true, I did have a jet-pack once, but gadgets are out of my life now. I've been downscaling: I don't even own a mobile phone any more. A while back, I decided to turn my phone off for a couple of days and it was bliss. Life has become simpler without one.

4 | Buck convention. It's a cliche to say that all rock stars were once the school geek. At school, I had girlfriends, I played sport, and I had no more angst than the next person. The only time I feel I've conformed to type is when I first came from Devon to London, a small boy in a big city. It was... eye-opening. [Suggestively] In every way.

5 | Shun Celebrity. I am not famous and I hope I never become so. I'd hate for women to go for me simply because I'm the singer in a band. The only way I want to touch people is through my music. Anything else is superficial and I want no part of it.

6 | Run! Hide! Sometimes I just want to hide away from it all. It's sad that I have to avoid going out simply because I don't want to run into fans who may be, shall we say, a little too eager.

7 | Money is the root of all evil. People say it brings happiness, but it doesn't. All I've found is that money alienates you from friends and family. The bigger the house you have, the more lonely you are going to be in it; the more cars in the driveway, the bigger the twat you become.

8 | Conjure ghosts. I live in Como, northern Italy, in a house that used to belong to the opera composer Vincenzo Bellini. I'm trying to trace his ghost right now to help me write songs. I do this late at night, 3am. I turn the lights down loa and start playing his songs on the piano in the hope of making contact. It hasn't worked so far, but I'm confident it will.

9 | Gamble everything. I'm currently involved with certain gambling syndicates all over the world, people gambling money on my behalf. The Asian markets are pretty buoyant at the moment, and I'm doing well. I also play a lot of poker, not just for my gambling needs, but because it's fun. I deal a mean hand.

10 | Accept strife. Chris [Wolstenholme, bassist] has done well - wife, three kids - but Dom [Howard, drums] and I have found it harder to settle down. Our private lives are all over the place and I put that down to being in a band. But then rock has never been conductive to a successful private life, has it? It's a cross I have to bear.