The Media section of the 30th October 2006 edition of The Independent featured a preview of the new Jools Holland series, including Muse' performance. It appears that Muse have already recorded their set list.[1] 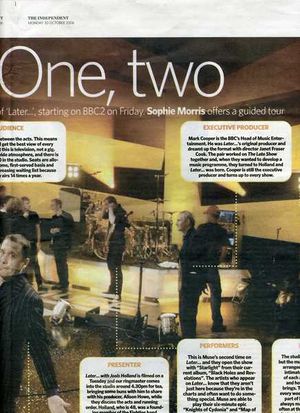 This is Muse's second time on Later... and they open the show with "Starlight" from their current album , "Black Holes and Revelations". The artists who appear on Later... know that they aren't just here because they're in the charts and often want to do something special. Muse are able to play their six-minute epic "Knights of Cydonia" and "Map of the Problematique".

Back to The Independent