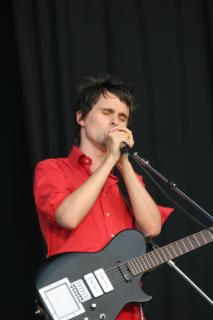 Muse were second down the set list, playing after My Chemical Romance and before head liners Linkin Park. Matthew Bellamy slid along the floor on his knees during a solo, Dominic Howard asked the crowd if they "were up for it" in Japanese, and Bellamy played part of Plug in Baby with his guitar behind his head.[2]

Bellamy's guitar malfunctioned a "few"[3] times,[1] during the second chorus of Knights of Cydonia it cut out completely. To the disappointment of some fans[3] Muse ended their performance before their alloted time had come to an end. Map of the Problematique was cut out of the set list in the process.[1]

At this performance, Bellamy wore a red shirt with red trousers. Christopher Wolstenholme wore a black shirt with black trousers.