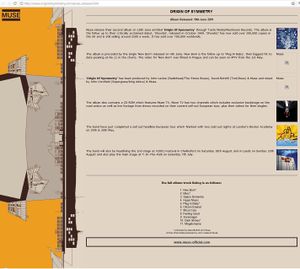 Muse release their second album on 18th June entitled 'Origin of Symmtry' through Taste Media/Mushroom Records. The album is the follow up to their critically acclaimed debut, 'Showbiz', released in October 1999. Showbiz has now sold over 200,000 copies in the UK and is still selling around 2500 a week. It has sold over 700,000 worldwide

The Album is preceded by the single 'New Born' released on 4th June. New Born is the follow-up to 'Plug In Baby', their biggest hit to date peaking at No. 11 in the charts. The video for 'New Born' was filmed in Prague and can be seen on MTV from the 1st May.

The Album also contains a CD ROM which features MuseTV. MuseTV has two channels which includes exclusive backstage on the road antics as well as live footage from show recorded on their current sell-out European tour, plus their videos for their singles.