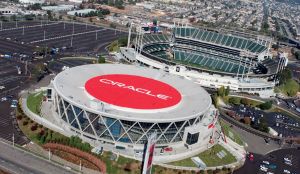 Oakland Arena with the Oakland Colisseum in the background

Oakland Arena, formerly Oakland–Alameda County Coliseum Arena until 1996, The Arena in Oakland until 2005 and Oracle Arena until 2019, is a multi-purpose arena in Oakland, California which was opened in 1966. The arena underwent a major renovation completed in 1997. The renovation extended the seating capacity by nearly 5,000 from it's then 15,025 to 19,596, which is also the arena's current capacity. The arena is home to Oakland Panthers of IFL and used to be home to many sports teams including the Golden State Warriors of NBA, California Golden Seals of NHL, California Golden Bears of NCAA, California Seals of WHL and California Golden Seals of NHL. The original arena was designed by Skidmore, Owings & Merrill, a Chicago-based architectural firm and the new arena was designed by HNTB Corporation, an American infrastructure design firm from Kansas. The arena was often named the Roaracle due to it's acoustics, able to generate high decibel levels with cheering fans, and the Oakland Coliseum Arena due to it's location next to the Oakland Coliseum. The arena is operated by AEG.

Since it's renovation, the arena primarily hosted many NBA games, including the 2015, 2016, 2017, 2018, and 2019 NBA finals. The basketball games also broke the arena's attendance records in 2007 and 2008. Musical acts who performed in the arena include Marvin Gaye, Parliament-Funkadelic, Pearl Jam, Van Halen, Metallica, Pink Floyd, Bob Dylan, Rolling Stones, Paul McCartney, Neil Young, AC/DC, Gorillaz, Rammstein, U2, Foals, Electric Light Orchestra, Primus and The Grateful Dead, who with 66 concerts, played the most gigs in the venue than any other act.

Muse played in the arena once on every headlining tour since The Resistance with an additional 2009 gig on the Live 105's Not So Silent Night event.