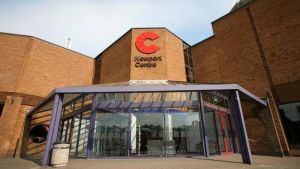 Newport Centre is a leisure centre in Newport, South Wales. The centre is located on the west bank of the River Usk, in Newport's city centre, adjascent to the Kingsway Shopping Centre. The Newport Centre was opened in 1985 and has a capacity of 2,000.

The Newport Centre includes a concert hall, which holds events such as concerts, conferences and exhibitions. It also includes a leisure pool with flume and wave machine and a multi-purpose sports hall with facilities for badminton, netball, basketball and volleyball. The building also includes a fitness and health suite with a sauna, aswell as a cafeteria and function rooms.