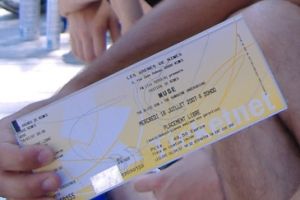 Hysteria had an intro consisting of two parts, the first using the Kaoss pad and the second was Rage Against the Machine song People of the Sun.[4] The latter has been used in the Hysteria intro on numerous occasions now.

After Supermassive Black Hole, Howard said "Merci. Ça va?" and Bellamy followed with "It's great to be back in this lovely venue". Howard then said "Maybe we should play a song".