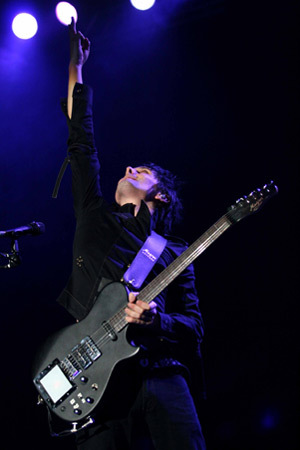 Bellamy during Take a Bow 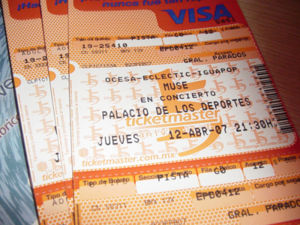 Standing tickets for the concert 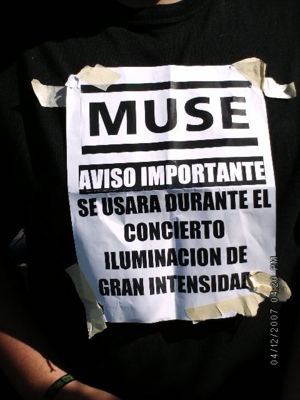 Poster that could be found outside the venue before the show. It means 'Important warning. A high luminous intensity will be used during the show'. 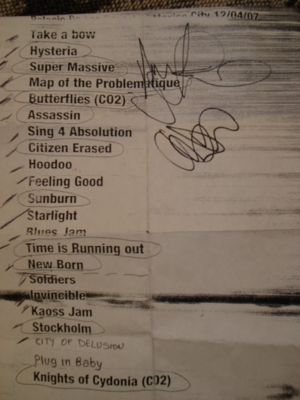 Tickets pre-sale was between the 15th and 16th of February 2007 through Banamex and general sale started 17th February 2007 through Ticketmaster. Tickets for sections A (standing) and B (seated) sold out during the pre-sale, while sections C, D and E (seated) sold out on the first day of general sale. A few days before the show, some seats on Section E were available through the Ticketmaster website. Many tickets were sold outside the venue, most of them between 1,000 - 2,500 MXM (100 - 250 USD). Many fans and media asked for a second concert.[3]

This was the first and only show in America, without counting USA or Canada. When the show was first announced, many fans hoped for a South American tour, but it didn't happen.

The trumpet bits of City of Delusion and Knights of Cydonia weren't played by Dan, but by a guest trumpeter who Bellamy presented in Spanish. Near the end of the concert the crowd screamed "Bliss! Bliss! Bliss!", a song which wasn't played.

The whole concert in FLAC is available here and here in MP3.

A high quality DVD of the concert is also available, here and here