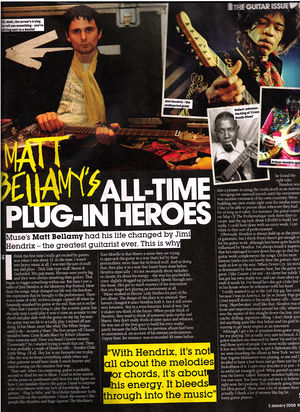 Muse's Matt Bellamy had his life changed by Jimi Hendrix - the greatest guitarist ever. This is why.

I think the first time I really got excited by guitars was when I was about 12. at the time, I wasn't into heavy music at all. I was into the sort of stuff my Dad plays - Dick Dale-type stuff. Simon and Garfunkel. 60's pop music. Nirvana were pretty big and they were always smashing their guitars. That began to trigger something within me. But then I saw a video of Jimi Hendrix at the Monterey Pop Festival. More than the song; what changed my life was the freedom, the expression that he brought to the performance. There was a sense of wild, reckless danger, capped off when he famously smashed his guitar at the end, then set it on fire.

After that I started trying to play the acoustic guitar. But the only way I could play was to tune an acoustic to one chord and play slide with the guitar on my lap, because the guitar was too fat to actually play. I started off just doing 12 bar blues, more like what the White Stripes used to do - acoustic-y blues. The first proper riff I learnt would've been 'Cross Roads Blues" by Robert Johnson, then someone said, 'Have you heard Cream's version, 'Crossroads'?' So, I started trying to work that out. Then I was probably a couple of Hendrix riffs - 'Voodoo Chile', 'Little Wing'. Of all, 'Hey Joe' is my favourite one to play. I like the way he keeps everything subtle when any other guitarist would have made it much heavier and tried to wring out the emotion that way.

That said, when I'm composing, guitar is probably second or third for me in Muse. I tend to write mainly on the piano or synthesizer and then try and figure out how I can translate it to the guitar. I tend to surprise a lot of producers with my lack of knowledge about guitars - 'Plug In Baby' and 'Stockholm Syndrome' both started life on the synthesizer. I think the reason I like people like Hendrix and and Rage Against the Machine's Tom Morello is that there's a sense they are trying to approach the guitar in a way that's led by their personalities, more than the technical stuff. And in doing that , they play it in a way that hasn't been done before. Hendrix especially - it's not necessarily about melodies or chords, it's about his energy - the way his psychedelic, crazy, slightly drugged-up personality bleeds through into the music. He's got so much mastery of his instrument that you forget that he's playing an instrument at all.

Muse worked in Electric Lady Studios for part of the last album. The design of the place is so unusual: they haven't changed it since Hendrix built it, but it still seems very futuristic. Not in a retro-futuristic kid of way, but it makes you think of the future. when people think of Hendrix, they tend to think of someone quite earthy and bluesy, they don't really think of outer space and whatnot. He was one of the first guys to build his own studio, partly because the bills from his previous album had been so astronomical, on account of his intense perfectionism: 'Gypsy eyes', for instance, was re-recorded 43 times before he found the right take.

Hendrix was also a pioneer in using the studio itself as an instrument - wringing out unusual sounds until the environment was another extension of his own creativity. We're building our own studio right now for similar reasons. I like to be able to pursue ideas wherever they lead, for as long as it takes. For instance, the guitar sound on 'Map of the Problematique' took three days create, and the rig took about £20,000 to build, but really, I could have done with an extra week. I can relate to that sort of perfectionism. Obviously Hendrix is always held up as the pinnacle of guitarists, but I think Prince hasn't got enough respect for his guitar work, although he's been quite heavily influenced by Hendrix. I've always found it impressive that he's managed to turn down his ego so that his guitar work complements the songs. On his most famous tracks you can barely hear the guitars, they're sunk so low in the mix. 'When Doves Cry', for instance, is dominated by that massive beat, but the guitar work's great. I like 'Cream' a lot too - it's clever but subtle. Prince has got his own studio too, and can chase ideas up dead ends if needs be. I've heard he's also got a fake live venue in his house where he rehearses with his band.

I really wanted to go to the Led Zep gig, but couldn't because I was in America. As far as Jimmy Page goes, I find myself drawn to his really heavy riffs - 'Immigrant Song', 'Heartbreaker', stuff like that. Hendrix was more loose and improvisational around his riffs, whereas Page was the master of this straight-down-the-line, instantly catchy, drilling, repetitive riffing. I don't think anyone did anything quite like that before and I'm glad he's starting to get more respect as an innovator.

Although I get a lot of attention from guitar magazines for my playing, I'm actually very anti-technical. A lot of guitar teachers are obsessed by Steve Vai and Joe Satriani and those sorts of people. I've never really understood it. It has very little emotion, to put it diplomatically. When we were recording the album in New York, we saw that Yngwie Malmsteen was playing, so me and Dom decided to have a few beers and go there for the fuckoffness of it. I can't even describe it to you - it was so awful yet strangely good. What greeted us on stage was the fattest, tallest, hairiest, weirdest buffoon genius I've ever seen. You have to go and see it to believe it - right now, he's peaking. He's definitely going through his Elvis period. There were a lot of women there actually. I think a lot of women like big, fat, hairy guitar players...."