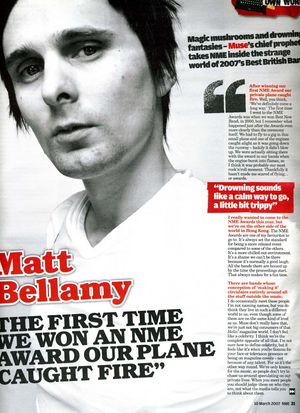 “The first time we won an NME award, our plane caught fire”

After winning our first NME Award our private plane caught on fire. Well, you think, ‘We’ve definitely come a long way.’ The first time I went to the NME Awards was when we won Best New Band, in 2000, but I remember what happened just after the Awards even more clearly than the ceremony itself. We had to fly to a gig in this small plane and one of the engines caught alight as it was going down the runway - luckily it didn’t blow up. We were actually sitting there with the award in our hands when the engine burst into flames, so I think it was probably our most rock’n’roll moment. Thankfully it hasn’t made me scared of flying.. or awards.

I really wanted to come to the NME Awards this year, but we’re on the other side of the world in Hong Kong. The NME Awards are one of my favourites to go to. It's always set the standard for being a more relaxed event compared to some of the others. It’s a more chilled-out environment. It’s a shame we cant be there because it’s normally a good laugh. All the bands there are boozed up by the time the proceedings start. That always makes for a fun time.

There are bands whose conception of ‘making it’ circulates entirely around all the stuff outside the music. I do occasionally meet these people. I’m not naming names, but you do think they live in such a different world to us, even though some of them are on the same kind of level as us. Muse don’t really have that, we’re just not big consumers of that Hello! magazine world. I don’t feel like a celebrity opposite of all that. I’m not sure how to define celebrity, but it feels like it's when you’re famous for your face or television presence or being on magazine covers - not because of any talent. For us it’s the other way round. We’re only known for the music, so people don’t try to chase us around speculating on our personal lives. When you meet people you should judge them on who they are, not what the media tells you to think about them.

If I had a choice of a way to go it would be drowning. I’ve heard its quite relaxing. Apparently there are a few seconds of panic when your lungs fill with water but once it's there you just chill out. You can sit on the bottom and go ‘Hey, this is cool’ and gradually fall asleep. It sounds like a calm way to go - just floating around, it sounds a little bit trippy. I’ve done a bit of scuba diving so I quite like hanging around the sea with fish. Who told me drowning was calming? Er, my mum did for some reason, I’m not sure, but I think she fell underwater once accidentally and nearly drowned and said to me, ‘Don’t worry, that’s the way to go!’ Weird, no?

Acceptance of death is something that seems to be missing in modern life. Everyone gets too precious about life - well, their own lives anyway. A lot of the work people do to stay healthy will just be extending the amount of time they’ll spend in an old people’s home. It’s not really improving the best parts of life. I don’t think people should be overly concerned with trying to sustain life too much. Everyone seems to be desperately scared of being unhealthy or dying at the moment and I think that’s a sad way to live. Trying to extend your life all the time seems almost like believing you’re so important that you deserve to live forever.

We’ve got a few songs that can only be played in front of a minimum of 10,000 people. Some of our songs suit a large cathedral-like space, they benefit from the reverberations. ‘Take A Bow’ doesn’t work in small venues, it just falls apart. I don’t mind that the venues we’re playing are getting bigger. From our point of view on stage the difference between 5,000 and 20,000 is not that big, it becomes a blur after the first 5,000 people. But the people who go to the gigs seem to think our songs work better in arenas, so that’s why we feel we can move into these bigger environments. I think other bands struggle though, I remember hearing about Nirvana losing something by playing those venues. Right now I’m excited about playing Wembley. It’s our first sports stadium gig and it means a lot for it to be in England as it’s the place where we play our best gigs. It wasn’t like that when we played the first two albums, but now we are at our best in England.

There are definitely a lot of people around now who are children of television. Telly became their parents, they spent more time watching the box or playing computer games and getting more emotional stimulation from that than from anything in their family. A lot of these people are cocooned in that reality and it’s a very disturbing place to be because it's so hollow and shallow - completely fucking weird. There’s a lot of it in LA.

Some songs need to collapse in order to exist. When I wrote ‘Invincible’ the lyrics moved around on that song quite a bit. Originally it wasn’t a love song at all. There were lines in it that were more politically orientated. It was like a socialist call, like, ‘Come, let’s all get together, let’s go and burn down the Houses Of Parliament.’ It was a little bit like something from V For Vendetta or something. Then for some reason I switched it over completely to being a love song. I wasn’t comfortable with that either, so it ended up somewhere between the two. Not quite full-on enough to be political and not-quite obvious enough to be a love song - it’s a song that you can apply to a few different things. Really, I’m just singing about change and how if you want it, it has to be done together. I feel that change needs to take place.

It’s embarrassing, but my dad’s band recorded Margaret Thatcher’s favourite ever tune and gigged with Rolf Harris. He was in a band called The Tornados and the song was called ‘Telstar’. They recorded it with [legendary ‘60s production maniac] Joe Meek. My dad told me loads of stories about working with him. He was a complete psycho. He was really schizoid and really moody, often quite violent with my dad’s band too. Apparently one time he threw a massive tape machine at them while they were running down the stairs, it hit the bass player and knocked him out. I suppose my dad got me into the idea of touring. He’d tell me stories about the things he would do and it sounded like such a weird life. It was way before I was born, but when I was growing up it was really interesting hearing about him doing gigs with Rolf Harris and The Beatles and all the bizarre stories he’s accumulated over the years. It was weird back then because it was different kind of touring world, you couldn’t just go and play around the world like you can now, so his experiences were a lot smaller - he even did a season at Butlins.

Up to the age of 13 I was more into being a classical musician. Then I went to see Rage Against The Machine at Reading Festival. After that I just got into rock music and followed a new path altogether. I think up ‘til then I’d wanted to be a good piano player, I didn’t really have any thoughts about being in a band. I think I’ve managed to find a way to bring my early musical influences into Muse though. I’m finding ways to creep different music into rock music - which isn’t necessarily the most musically challenging area. Every now and again I listen to something classical and think, ‘I would like to have been good enough to succeed in that world.’ I missed out on that opportunity though, I would have had to study quite hard throughout my teenage years - and I was far too busy doing the things I shouldn’t have been.

Taking magic mushrooms in Devon was good for the band. Being in Devon nobody ever told us that we weren’t cool or anything like that. We didn’t have many outside reference points to know what the ‘right’ or ‘wrong’ music to make was - and I think that was really good for us. We just grew up loosely, taking mushrooms and inventing our own world to live in. It wasn’t until we travelled outside of that world that we realised just how weird it was.