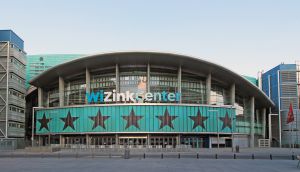 Main entrance to the arena

WiZink Center is an indoor multi-sports and concert arena located in Madrid, Spain. One of the former names, Palacio de Deportes de la Comunidad de Madrid (Sports Palace of the Madrid Community; official name between 1985 and 2001, and between 2005 and 2014), is still commonly used to name the arena. In 2014 up until 2016, the building was renamed to Barclaycard Center and in 2016 it was renamed again to the current name.

In 1872, works began on what used to be an area of orchards to build a bullring. The bullring was demolished in 1934 after a new larger bullring was built. The site remained empty up until 1952, when Mayor José María Gutiérrez del Castillo promoted the construction of an indoor arena modeled after large arenas of other European capitals. The arena was designed by architects José Soteras and Lorenzo García Barbon and opened in 1960. It's original capacity range was between 10,000 and 16,000 depending on activities held inside. In 1969, the arena was expanded with basketball, cycling, hockey and athletics courts. The building was known as Palacio de Deportes before the ownership has been transfered to Comunidad de Madrid. The arena is home to CB Estudiantes basketball club from 1987.

In 2001 a large fire engulfed the arena, with it ending up in ruins and in need of a reconstruction and rebuild. The construction of the new arena, designed by architects Enrique Hermoso and Paloma Huidobro, started in 2002. The arena was reopened in 2005. In 2010, CB Estudiantes returned to the arena, and in 2011, Real Madrid Baloncesto also declared the arena as their home ground. The capacity of the new arena is similar to the older one, raging between 10,000 for athletics events and 17,453 for concerts.