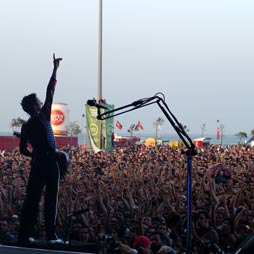 Muse's only Portuguese show of the entire Absolution tour. It was Matthew Bellamy's birthday and the Portuguese fans didn't forget it.

Before Hysteria, someone introduced them as "the best band in the world".

A video of Stockholm Syndrome can be found on the Muse website. During Stockholm Syndrome, before the first verse, some strings on Matt's 007 broke. He continued singing part of the first verse before he ran to the side of the stage to meet his guitar tech where he swapped the 007 with the Delorean in 2–3 seconds. Dom and Chris continued playing regardless. They finished with what was probably the longest riff section in the tour. Matt pulled apart the drum kit before the Execution Commentary riff and sat on the bass drum for the remaining riffs. Chris played the Execution Commentary riff in the crowd where his shirt was ripped. Chris threw his shirt into the crowd once the riffs had finished. Matt walked off stage with his guitar on his head playing with the Fuzz Factory .