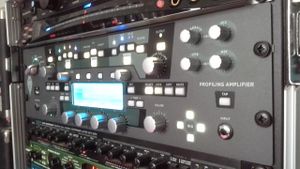 The Kemper Profiling Amplifier is an all in one Amplifer Modelling Rack Unit. It is used by many touring musicians so they don't need to carry large Amplifiers and cabinets on tour, Matt used 2 x Kemper Amplifiers for the 2nd Law Tour and 3 x Kemper Amplifier (Rack version) for the Drones Tour.

The Kemper amps have now replaced the Vox AC30 head, the Modified Marshall Head and Egnater M4 Modular Preamp which were last used on The Resistance tour. Matt only uses this for his amp sounds and no effects are used in this unit because the Axe FX does all that.