MuseWiki, wiki for the band Muse
(Redirected from JT-Res)
Jump to navigation Jump to search 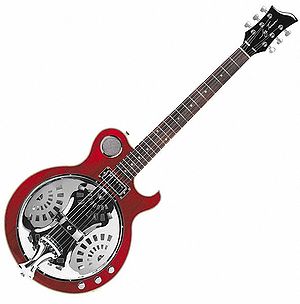 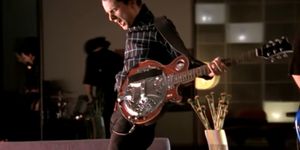 The JT-Res resonator guitar was built by Illinois-based US stringed instrument manufacturer, Jay Turser. The company produces everything from mandolins, banjos to electric and acoustic basses and electric and acoustic guitars. They also produce a "signature" series of acoustic guitars named the "Jay J" series. Production facilities are located in China and their products are sold worldwide. They also produce guitars targeted to entry-level musician, coming in packs with instructional DVDs.

Aside from the JT-Res, the company also produces the JT-900RES, which is more of a classic resonator guitar.

The JT-Res is considered a thinline electric resonator guitar and includes a solid poplar or basswood body with a resonator, a maple neck and a rosewood fretboard. It also features two pickups, a piezo bridge and a minibucker neck pickup. The guitar is available Jay Turner guitars in two colors; Antique Sunburst and See Through Red (the latter one being used by Matt).

Additionally, Bellamy's JT-Res, similar to other guitars used between 1999 and 2001, also features tape on the guitar.

This guitar was featured in the Plug In Baby music video. As far as it's known, it was only used for the video.

Go back to Guitars