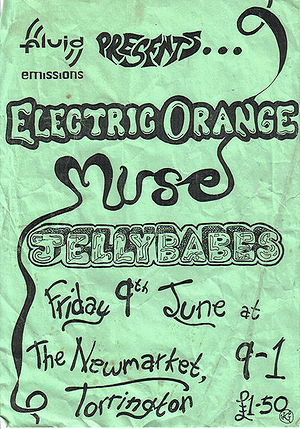 One of multiple alternating support/headline gigs in North Devon with fellow Devonian band Electric Orange. This one was sponsored by Fluid Emissions of Bideford.

The gig's occurrence was discovered when a former Electric Orange member submitted a promotional poster to a Facebook-based Muse fan group. Although said person thought the gig had occurred in 1993, the date on the poster states "Friday 9th June", of which there wasn't one in 1993, but was in 1995.

Other locations the member claimed had been part of this series of gigs include Ilfracombe, Exeter, Teignmouth along with other Devonian towns.