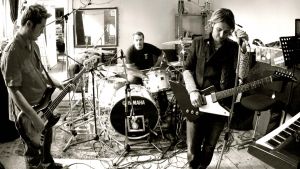 Feeder are a Welsh indie/alternative rock band that formed in Newport in 1994. The band was originally made up by Grant Nicholas and John Henry Lee. After putting an advert for a bass player in a London newspaper, Taka Hirose responded and thus became Feeder's bass guitarist. Feeder's first EP was released in 1995, consisting of two songs and dubbed "Two Colours". This was followed by three albums - Polythene, Yesterday Went Too Soon and Echo Park, the latter most of which coincided with a rise in the band's popularity.

In 1999, Muse supported Feeder for a leg of concerts in the United Kingdom.[1] Nicholas later recalled this and wished Muse "all the luck in the world".[2]

In 2002, John Lee hung himself in Miami. After a short break, the band resumed touring with a hired drummer, who was replaced by Mark Richardson, formerly of Skunk Anansie. Richardson later became the band's permanent drummer.

Although their later album Comfort In Sound has a note about Lee on the inside sleeve, the music on the album as well as a demo was already complete before his death. Fans sometimes mistake the album as having been composed in his memory, which is not the case.

Feeder then went on to write another album, named Pushing The Senses. Feeder were meant to have recorded a subsequent album in 2006, but due to success of "The Singles" compilation, they decided to continue touring and delay recording.[2] In November 2007, the band was recording in Abbey Road Studios.[3] In 2008, they released a new album called Silent Cry.

In 2009, the band split ways with Richardson which was replaced by Karl Brazil, who had just come off tour with James Blunt. The same year, they announced they'd be heading back into the studio, where Tim Trotter also filled in on studio drum duties when Brazil wasn't available due to touring with Robbie Williams, Natalie Imbruglia and Ben's Brother. Renegades was released in 2010. A number of tracks from this album were left out and were considered being included in the follow-up album. This resulted in a release of Generation Freakshow in 2012. After extensive tours in 2013 through 2015, the band took a longer break.

In 2015, Feeder started working on new material. After a few announcements and festival performances, they released All Bright Electric in 2016. The year later, they released a compilation of tracks called The Best of Feeder, featuring all previous singles from their career and a new mini-album of new material called Arrow.

Tallulah, their latest album, was released in August of 2019.

Nicholas stated in an interview at the Carling Weekend, Reading 2006 that the members of Feeder have known Muse for a long time.[2] Whether he means as a band or personally is unclear.