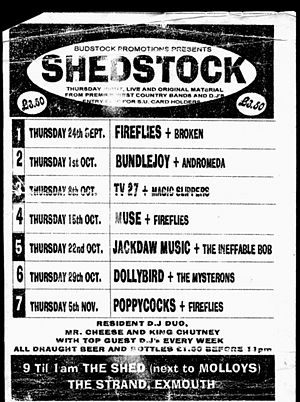 Shedstock was a series of seven concerts at The Shed.[1] This gig was the last gig of "several"[2] Muse played with the bands of Budstock's organiser,[2] in this case the Fireflies. Said person was also the organiser of this event. For this concert, the venue apparently was "packed".[2]

At this concert, Matthew Bellamy used a PA amp running stereo Peavey Cabs on either side of the stage, which the aforementioned person described as sounding "amazing".[2] Due to complaints over the high noise levels by neighbours, this was the last time Shedstock occurred[2] and the final three concerts were cancelled.[2] Each concert was scheduled to span from 21:00 until 01:00.[1] Entry appears to have been free for student union card holders.[1]