(Article from the Spanish newspaper El PAIS, written by Fernando Neira and published on the 17th June 2010)

Muse or the rock parabola as a revulsive 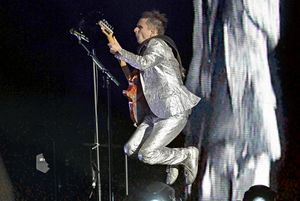 Matt Bellamy during the concert

Ah, it's a bad thing when the world turns upside-down. We would've imagined that yesterday would have been a hot summer night, sweaty and with football exaltation1, but the 44.000 souls who attend at their appointment with the British band had to resort to a jacket under the arm, watching the grey sky of the capital and feeling low , as if our heads had been beaten like Gerard Piqué2.

At 9 p.m, the bleachers didn't look like if there was a party going there, but like the purgatory's waiting room. But everything changed at 22.18, so we'll have to be forever thankful to Matthew Bellamy because yesterday he submitted us to an expeditious therapy of rock, melodrama, adrenaline and decibels.

This trio that nearly bursts Calderón stadium is the first thirty-year-old-members band that dares to practice stadium rock around here, speciality till now reserved to already settled glories like Springsteen or U2. But you end up by liking this laconic guys because they unite by themselves some of the best popular references of the last three decades.

Undisclosed Desires, which they played up in a platform, seems a Depeche Mode B-Side; the tremendous United States of Eurasia aspires - without disguise - to take over Bohemian Rhapsody, and Guiding Light improves that solemn Vienna by Ultravox. Add a pinch of Led Zeppelin and some drops of Radiohead and we have organized a mess.

It looked as if it was going to rain as we had a cloudy night yesterday. Bad luck, crossover cables, the great depression. Lucky we were that Muse with their symphonic spells, their paraphernalia of grandeur for everyone, rescued us from the depths of the quagmire.

Let's sum up. Maybe the crisis is bleeding us to death, Merkel is annoying us and the sea dripping wet with tar.

It's possible that we get fired cheaper or we keep an eye on someone who doesn't look in the same direction. Maybe humanity is being lazy while God is in dereliction of duties. Meanwhile, Uprising roars in a stadium , with its winks to Call me by Blondie, and everything changes. And if the second song of the night is Supermassive Black Hole, with its epic guitar squeal, you feel like having a beer with the peer next to you and send an SMS full or little hearts.

That's what they achieved yesterday, precisely, those three stylish British and their keyboardist in the rear: bring us back faith. To believe again in rock as a catharsis, as the revulsive of a swarm of fists that rise rhythmically as if, for one moment, we could agree on something. They were lazy arms at the beginning, we must not fool ourselves, as if skepticism made us immune even to guitar riffs. But from the moment when the outburst of fury call Hysteria began no one was still on their seat.

Bellamy is so restrained that leaves the (few) presentations to the drummer, Dominic Howard. There's not even a spot for to much pyrotechnical exhibitions: a stage that looks like a ocean liner's keel, an UFO from which emerges a trapeze artist, gigantic eye-shaped balloons, and a confetti explosion. But the setlist is so solid and vigorous that is doesn't need endless tricks.

The show begins with the irruption of people with flags, as if they were anti-establishment protesters, with messages such as: "There's no one we can trust". Lies. When the faith is lost, even in Vicente del Bosque3, we have, at least, Matthew and his boys. And that's a relief.

1 On the 16th June the Spanish Football team played its first World Cup match against Switzerland.

2 Football Club Barcelona player, who was injured in the head during a match.

3 Vicente del Bosque is the coach of the Spanish football team. This is said because the team lost against Switzerland 0-1.

Go back to El País