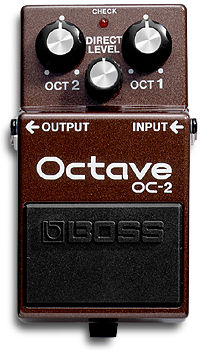 The Boss OC-2 Octave is an infamous octaver pedal produced and sold by Boss Corporation (not to be confused with the fashion company or the cigarette brand), a pedal manufacturer and division of Roland Corporation, between 1982 and 2003 before being discontinued and replaced with an Boss OC-3.

The OC-2 is famous for it's brown enclosure and for being able to produce either one or two extra octaves below the original tone. The pedal was made in Japan and Taiwan, with the Japanese pedal regarded as being the best. Even now, with the OC-3 pedal being on the market for nearly 2 decades, people still keep choosing the OC-2 over the OC-3, due to it's signature sound and better tracking of the lower notes (especially noticeable on bass). For this reason, many companies, such as Valeton, have decided to make copies of the OC-2.

Some bassists even use the OC-2 as a sub synth pedal, as it's tracking and sound capabilities, when having one octave below fully engaged with no dry signal mixed in, are able to produce a great-sounding triangle soundwave.

The Japanese OC-2 is used by both Matt and Chris with Chris using it the longest, ever since Showbiz. Despite him only seen having one of these in the rack, it is likely he has more than one copy of the pedal for backup purposes.

It's most notable use is in the bass tone of Futurism.

Go back to Bass
Go back to Guitar effects & Amplifiers