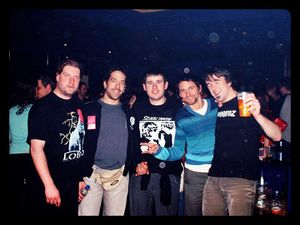 Berri Txarrak are a basque metal (early) / rock band from Navarre, Spain, that HyperChondriacMuser really loves (and thinks that they need more recognition).

The band consists of Gorka Urbizu, David Gonzalez and Galder Izagirre, is a trio whose songs are sung in Basque. The band was founded in 1994 in Lekunberri, and currently are on a break since 2019. Their most known song is Denak Ez Du Balio, which features additional vocals from Rise Against's singer Tim McIlrath. Their primary influences include Nirvana, Weezer, Rage Against the Machine amongst many others.

The singer, Urbizu, stated that he likes Muse, and they covered Time Is Running Out at least three times in 2006. Listen to one of their covers here. The full band also met Matt Bellamy in 2004 at a show they did at The Garage, in London.

They supported Muse on the MTV World Stage 2018 performance held in Bilbao.

Fun fact: A couple of days after creating this page, the band was announced as the supporting act at the Bilbao gig. What a great coincidence.