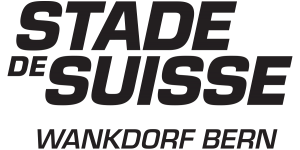 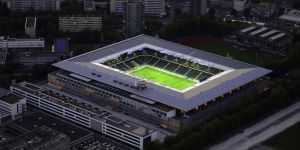 Stade de Suisse (translated in English as Stadium of Switzerland) is a football stadium in Bern, Switzerland. It's the second largest football stadium in Switzerland and is home to the BSC Young Boys football club. The stadium opened in 2005 and built on the site of the former Wankdorf Stadium, which was demolished in 2001. It was designed by Marazzi Generalunternehmung AG architectural firm. The stadium's capacity is at 32,000 for football games and at 45,000 for concerts. The first match to take place on the stadium was between Young Boys and Olympique Marseille with only 14,000 spectators, as the match was considered an "infrastructure test".

One of the interesting features of the stadium is a single red seat located in between the black and yellow seats. This was the first seat installed on the stadium and was honourably unveiled by former Young Boys player and manager Walter Eich. No tickets are available for the seat, and it is usually occupied by a notable personality, often with ties to the club. In 2007, the stadium and it's artificial turf provided Europe's first "new era" outdoor attendance record for ice hockey with 30,076 fans watching a hockey match between SC Bern and SC Langnau.

The 2010 Muse performance at the stadium was the first show of The Resistance stadium tour. The gig featured a premiere of the drum and bass jam, titled "MK Jam" or "Wankdorf Jam", the latter one named after Wankdorf area the stadium is located at.