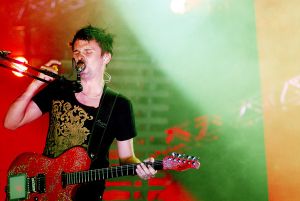 The show was broadcast live on two Spanish radio stations, 'Radio 3' and 'Radio Única'. Radio 3 broadcast four songs. Radio Única's broadcast was cut halfway through Butterflies & Hurricanes and returned just before the guitar solo of Invincible. Feeling Good, played between the two, was not broadcast at all, much to the annoyance of Muse fans across the world listening live. Take a Bow wasn't broadcast either because the radio station had thought that the concert was already finished. The rest of the songs were broadcast by them.

Radio Única's broadcast, along with an interview which was heard before the show, was recorded by a member of Muselive.com and is available here[registration needed]. 'NME' uploaded a short interview with Matt Bellamy before Muse's performance to youtube and it can be seen here.