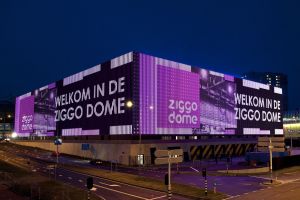 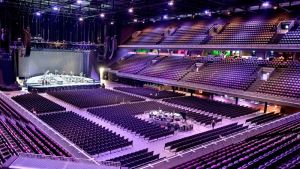 Ziggo Dome is an indoor multi-purpose arena located in Amsterdam, Netherlands. It is named after a Dutch cable TV provider, Ziggo. The arena was built between years 2009 and 2012 and opened in June of 2012, designed by Benthem Crouwel Architekten, a Dutch architectural firm from Amsterdam. Despite the name using "dome", there are no round or dome-like shapes featured in the building itself. Rather, the building is shaped like a square block. The outside of the arena is covered in a large LED screen consisting of 840,000 LED lights. It's maximum capacity is 17,000. The arena is located near the Amsterdam ArenA stadium.

Ziggo Dome is mainly used for concerts as it's designed for amplified music, but can also be converted into a sports arena with possible conversions to a tennis field, an ice rink or korfball field. The arena can also convert for swimming competition with a possible installation of an Olympic-sized swimming pool. In 2017, the venue was ranked the fifth busiest in the world, behind Madison Square Garden in NYC, SSE Hydro in Glasgow, Manchester Arena and The O2 Arena in London. Music artists who have performed in the arena include Pearl Jam, U2, Elton John, John Mayer, Depeche Mode, Gorillaz, Hugh Jackman, Tool, Adele, Sting, Iron Maiden, Queens Of The Stone Age and more.

Muse were the seventh band to perform at the arena after it's opening and have returned to the arena every headlining tour since then. The gig on 9th of March 2016 was also filmed as part of the Drones World Tour Film.