A Day At The Opera (Intro online article)

Translated from German to Italian by Bellsmuse, and from Italian to English by Arraggiatus. 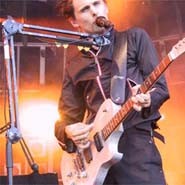 Intro.de May 2006: A Day At The Opera - Die Listening-Session 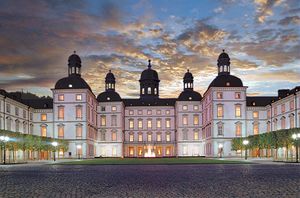 A Day At The Opera - Die Listening-Session

Muse are still there. In July they'll release new album Black Holes and Revelations, it's their 4th without including the live Hullabaloo. Matthew Bellamy, Chris Wolstenholme and Dominic Howard invited press for a listening session at the beauty Bensberg castle, near Koln, in Germany, in the middle of April.

A noble background, because Muse lately are not anymore just young Radiohead cover band but now sing Bohemian Rhapsodies, as we listened forward.

It begins with the usual synthetizer, opening the album with a dramatic growing, where only Bellamy's voice's melody takes us to ground again.

With accuracy, it involves us: "You'll burn in hell", promises, before that Take a Bow definitely exits with Queen-style chorals. We knew what to expect. The first, real surprise: Starlight is a tender dance track, mixed with light electronics; It could have been found on an A-Ha album. "Our Hopes And Expectations/Black Holes And Revelations" - Lyrics break the party: Esoteric illumination always fitted perfectly with Muse. A strong track, absolutely atypic and probably the second single.

If there is a second single, there is a first one, and this confirms definitely that Muse are serious: Supermassive Black Hole is a heavy-funk-monster that makes you dance. Matthew Bellamy does like Prince, singing "uh yeah" and "baby". Not really predictable although long discussions on the web, we have to wait to know that it's a good single. At least if you are not called Prince. It follows with Map of the problematique. Here again, we're surprised for accuracy of chorals and space synthetizers that remind a bit of Depeche Mode.

A Soldier's Poem goes along the unexplored, not only about the music with its soft Jazz drums line and Barbershop singing, but for first explicit song about politics by Bellamy's pen. He describes the daily life of a soldier during the war in Iraq. A short song, because the following Invincible is the first of the second part that seems with its own. Opened with a march rythm and growing always until its end. "Tonight We Can Truly Say: Together We're Invincible". Probably a love song.

Like this is not least, a high speed metal riff surprises us, in System of a down style. Assassin begins brutally as its title declares, the short keyboard intro reminds old good times of videogames, a final enemy of Nintendo. And it's similar and dramathical. The best Queen-like song from years: vocal performance is almost too much bold, fearless.

Exo Politics describes connections of politics with aliens, and talks about violent conspiracy theories. A sort of hobby for Bellamy, that plays a riff like Franz Ferdinand. Probably listened in New York discos.

City of Delusion brings us to the end. A flamenco guitar, violins and more, I wrote Morricone on my notes. While we would ask where are we going to, we understood: this was only the beginning, next Hoodoo ties up Tex Mex influences with Rachmaninov, today Muse go in this direction. And, for not being misunderstood: this is fantastic. Knights of Cydonia brings us Queen back again. Large "aahs" on the chorus, a double, or triple, Matthew Bellamy. My swiss mate wrote about cavalry guitars at the beginning, that are so Iron Maiden, and more.

Go back to Intro.de