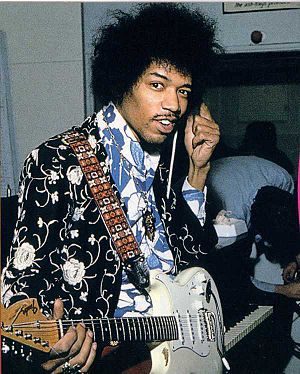 Jimi Hendrix caused Matthew Bellamy both to starting listening to heavy music and to attempt learning acoustic guitar. Prior to hearing and seeing Hendrix's performance at the Californian festival Monterey International Pop Music Festival, Bellamy listened to the same lighter genres of music as his dad, George Bellamy, did. After hearing and seeing said performance, Bellamy was inspired by Hendrix's prowess, energetic emotion of his performance and Hendrix's personality "bleed[ing] through".[1]

A journalist once called Bellamy "Mini Hendrix".[source?] He used to smash his guitar at the end of gigs as Jimi Hendrix did, but it was more a way to evacuate the frustrations when the concert was not as good as he had hoped[ as opposed to...?].[source?] Today, he relates to Hendrix's studio perfectionism. For instance, Bellamy noted that Hendrix recorded 'Gypsy Eyes' 43 times before judging a take adequate.[1]

As with Bellamy, Hendrix was a longtime science fiction fan, often singing about space and travelling into it. "Purple Haze" was reportedly inspired by a short story by science fiction writer Philip Jose Farmer; Hendrix's explanation of the song explained his lyrical approach. "It's about going through this land", he said, "I like to [...] write a lot of mythical scenes [...] Like how they got the Greek gods and all that mythology--well you can have your own mythology scene, or write fiction".[source?] Several of Hendrix's more widely known songs—such as "Third Stone from the Sun," "Up from the Skies," "And the Gods Made Love" and "1983...(A Merman I Should Turn to Be)"—fit within this lyrical style.