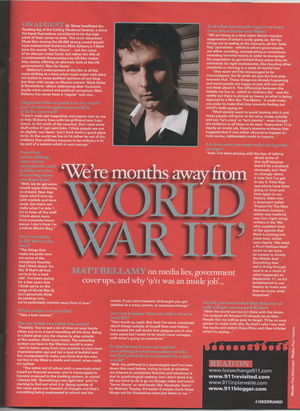 Interview with Bellamy in Kerrang. Originally transcribed by James 'sunburnt_atheist' on Muselive.com.[1]

Matt Bellamy on media lies, government cover-ups and why '9/11 was an inside job'....

On August 26, Muse headlined the Reading leg of the Carling Weekend festival, a show the band themselves considered to be the high point of their career to date. The more observant Muse fans among the 80,000 strong crowd would have noticed frontman Matt Bellamy's t-shirt bore the words 'Terror Storm'...not the name of an obscure metal band, but rather the title of a controversial documentary by US film-maker Alex Jones, offering an alternate look at the US government's 'War on Terror'.
Bellamy's endorsement of the film is all the more striking at the time when most major rock stars are loathe to voice political opinions of any kind, but then with songs on Muse's current 'Black Holes and Revelations' album addressing alien invasions, media mind control and political corruption, Matt Bellamy has never been a 'regular' rock star..

Magazines like to paint you as a wierd guy: do you recognise yourself in articles you read?
I don't really get magazines and papers sent to me in Italy (Bellamy lives with his girlfriend near Lake Como, in the north of the country). But I read some stuff online if I get sent links. I think people see me as slightly 'out there', but I think that's a good place to be. In the world we live in I'd rather be out of the ordinary than ordinary because to be ordinary is to be part of a system that is very corrupt.

Now that you're talking about conspiracies and politics are you attracting more crackpot fans?
Well, we do get some beserk types following us around, New Age types who'll turn up with crystals and tarot cards, but that's not what I'm really into. I try to keep all the stuff away from complete hocus pocus. I don't think I'm a full-on Mystic Meg

Does anything in life throw you now?
The things that make me panic now are some of the conspiracy theories that I think about. It's like 'if that's true, we're in for a hard ride'. I've been saying for a few years that I think we are on the verge of World War III, but I genuinely think its starting now...we're potentially months away from it now.

What makes you say that?
Take a look around.

Do you think you think too much?
Possibly. You've got a lot of time on you hands when you're in a band travelling all the time. Being in a band gives you the chance to step outside of the system, think more freely. The schooling system we have in the Western world is crazy - you're taken away from your parents at your most impressionable age and fed a load of bullsh*t and lies manipulated to make you think that the way we live in the West is stable and moral, when really it's neither. You come out of school with a one-track mind based on financial success, you're encouraged to become enslaved to the banking system. In school, I always felt, 'Something's not right here' and I'm starting to find out what it is. Being outside of the norm gives you freedom of thought and that's something being suppressed in school and the media. If you have freedom of thought you get labelled as a crazy person, or someone strange

Are you happier than any other time in your life?
Very much so, yeah. But then I'm more concerned about things outside of myself than ever before. I've ousted the self doubt that plagues you in your early years but I seem to be much more unhappy with what's going on around us.

Is that because you control everything in your immediate world but feel powerless to control the wider world?
Well, my girlfriend is a psychologist and I've been down this road before, trying to look at whether my interest in conspiracy theories and whatever is due to psychological reasons, but I don't think it is. All you have to do is go on Google video and watch 'Terror Storm' or read books like 'Synthetic Terror' by Webster Tarpley. It's better if people check these things out for themselves than just listen to me.

And what can people expect to learn from these books and films?
We are living at a time when there's massive suppression of what's really going on. All the things we're seeing at the moment, all the 'false flag' operations - which is where governments are either assisting orchestrating or sometimes inventing terrorist events in order to encourage the population to get behind them when they do extremely far right manoeures, like invading other countries or moving to a state or martial law. Very soon we'll be encouraged to be microchipped, the ID cards are just the first step towards that. These things are already happening and most people are happy to just chill out and not think about it. The differential between the bubble we live in - which is 'ordinary life' - and the reality out there is almost as heavy as what is being depicted in a film like 'the Matrix'. It could make you puke to make that step towards finding out what's really going on. Most people want to avoid looking into it and those people will point at the stray sheep outside and say 'he's crazy' or 'he's psycho' - even though the evidence is all there to be seen. 9/11 is clearly an inside job, there's massive evidence that suggests that it was allowed to happen, or even worse, deliberately made to happen...

Are you sure you want to be saying this on tape?
Yeah. I've been playing with the fear of talking about some of this stuff because there'll obviously be a backlash, but I feel strongly about it that I've got to say it. False flag operations have been going on time and time again in our history: there was a document called 'Project for the New American Century', which was made by neo-Con (right wing) writers in the '90s who supplied most of the agenda that Bush is putting into place now, which says clearly, 'We need a Pearl-Harbor-level event so we have an excuse to invade the Middle East'... Everything that we're living through is as a result of what happened on 9/11, so it's fundamental to our history to make sure we know what happened.

Aren't you concerned that this sort of talk will get you on an FBI list?
With the world we live in I think with the books I've ordered of Amazon I'll already be on lists... People like me will be an easy target. I'll be an easy person to make look silly. So that's why I say I read the books and watch the books then criticise what I'm saying.

Go back to Kerrang