MuseWiki, wiki for the band Muse
(Redirected from Seattle KeyArena)
Jump to navigation Jump to search 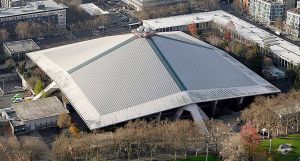 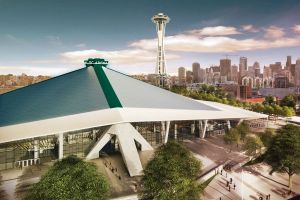 Center Arena, also officially reffered to as the New Arena at Seattle Center, previously known as KeyArena, Center Coliseum, Washington State Coliseum and Washington State Pavillion, is a multi-purpose indoor arena located in Seattle, Washington. It is located at the sports and entertanment complex known as the Seattle Center (hence the new name). It was opened in 1962 originally for the Century 21 Exposition and was designed by architect Paul A. Thiry. After the Exposition closed, the City of Seattle bought the pavillion and converted it into an arena. The arena, closed since 2019, is currently under major re-development and is scheduled to open in June of 2021. This would be the third renovation after 1962 and 1994/95. In 2017, the arena's exterior, including the roof, was given landmark status and in 2018, it was listed into the National Register of Historic Places.

The arena is home to Seattle Storm of WNBA, Rat City Roller Derby of WFTDA, Seattle RedHawks of NCAA and The International esports championship for the Dota 2 video game. When the arena opens in 2021, it will also be home to the NHL Seattle hockey team. Previous tennants include Seattle SuperSonics of NBA, Washington Huskies of NCAA, Seattle Thunderbirds of WHL and Seattle SeaDogs of CISL. Until the re-development began, the maximum capacity of the arena sat at 17,459 and is planned to be extended by an additional 2,000, to 19,125.

Some sporting events that took place at the arena include various NBA and NCAA games, several WWE events and the 2017 Match for Africa 4 tennis exhibition match, organised by Roger Federer, featuring Bill Gates, John Isner and Mike McCready. Musical acts who performed in the arena since it's opening include The Beatles, Metallica, U2, Depeche Mode and more. In 2011, the arena hosted audition stages for the first season of Fox's The X Factor.