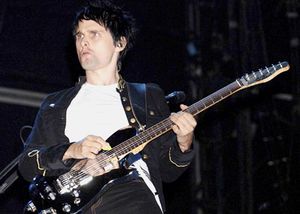 UPDATE: Alex Jones commends Muse for their bold stance in using their high profile to educate people on the truth about 9/11. He also extends an open invitation to Muse or their representatives to contact us so we can discuss how to educate the public further.

Critically acclaimed rockers Muse cited Alex Jones' new film as one of their influences as frontman Matt Bellamy scrawled "Terror Storm" on the back of his shirt for the band's Saturday night headline gig at the Reading Festival in the UK.

The Reading Festival is famous worldwide amongst music lovers and is regularly screened by the BBC to viewers in the UK. Muse are considered one of the best alternative rock bands in Britain and they have played many large stadiums in the United States, in which their fan base is also large and ever-expanding.

"Go to Google Video, type in Terror Storm and you'll find a nice little surprise. It will shed some light on world affairs, put it that way. I rather point you in the direction then preach about it myself," said Bellamy.

A BBC news report also picked up on the story.

"With "terror storm" written on his T-shirt, singer Matthew Bellamy took to a white piano at one point. Afterwards he said they were getting a vibe from the crowd, and in the words of their own song they really seemed invincible."

It is very exciting and a boon for the 9/11 Truth Movement to have a major rock band encourage people to watch Terror Storm in front of 80,000 festival goers and millions watching at home on BBC television.

The connection between the cultural zeitgeist and the 9/11 truth movement as well as the wider truth movement in general is evergreen and can only help in spreading awareness amongst those who will inherit the battle to preserve all our freedoms - the youth of today.

It is our task to nurture that bond and ensure that it isn't just a flash in the pan that gets replaced by the next fad in a couple of years time. Muse should be commended and more people in the public spotlight encouraged to use their soapbox to educate people on the reality of the hidden hand that directs world events from behind closed doors.

Go back to Prison Planet