Difference between revisions of "Zane Lowe" 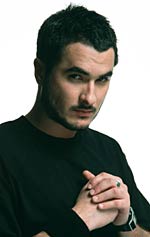 Zane Lowe (full name Alexander Zane 'Zipper' Reid Lowe) is a New Zealand radio DJ, live DJ, producer and TV presenter. After a brief career in DJ-ing and producing in New Zealand, he moved to the UK in 1997 and started presenting on XFM (now Radio X) and MTV Europe. In 2003, he started hosting a global music show on BBC Radio 1 which he hosted until 2015, when he moved to Apple's radio station, Beats 1, in Los Angeles, becoming one of their prime-time presenters and their music curator. Between years 2002 and 2015, he presented Gonzo on MTV, which was the flagship music show.

As part of his hip hop DJ career, he played at a number of festivals including Coachella, Glastonbury and Bestival, and has toured with artists such as Kasabian, Skrillex, The Weeknd and The Prodigy. He was also a regular performer at Ibiza and Mallorca Rocks. Lowe opened for Muse during both nights at Wembley Stadium in 2007, on 16th and 17th of June.