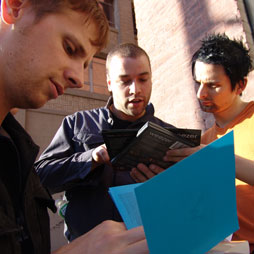 Muse in 2004, inspecting Weezer's Video Capture Device DVD and the Deluxe edition of the Blue album

Matthew Bellamy likes Weezer. He has proclaimed that he loves anything that Weezer does. He didn't like Weezer's 2001 self titled album (aka The Green Album) at first, but it grew on him.[1] He likes it in part due to it being short and simple. Dominic Howard said Weezer is one of his favourite bands.

Go back to Influences