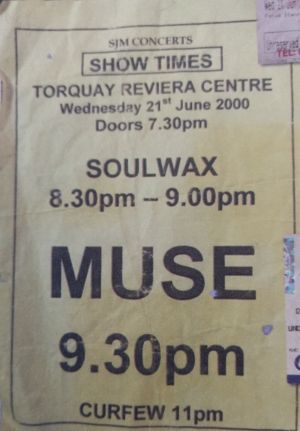 Matthew Bellamy apparently had a "few" guitar difficulties during Muse's performance.[2] Chris Wolstenholme crowd surfed after Showbiz with his bass guitar still on him,[2] after which he managed to return to the front to play the outro,[2] presumably the Ashamed riff. During the outro Matthew Bellamy smashed his guitar into his amplifier "repeatedly", after which both Wolstenholme and Bellamy's guitars were thrown into the drum kit.[2] Agitated, Minimum, Yes Please and Falling Down were later confirmed by a different review.[4][5]

Incomplete. Incomplete, based on a review[2]