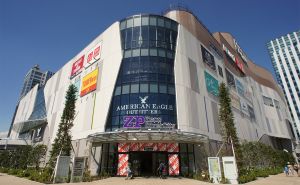 The DiverCity Plaza, location of the Tokyo DiverCity Zepp

The Zepp DiverCity is one of the Zepp halls in Japan. The music halls are spread around Japan and play host to many international gigs. They are also a popular stop for many Japanese musicians. The company is a subsiduary of Sony Music Entertainment Japan and is sponsored by Asahi Breweries.[1]

The Tokyo Zepp DiverCity, located at the DiverCity Plaza, opened in 2012 and has a capacity of 2,473, making it the fourth largest of the Zepp halls. It is not to be confused with Tokyo Zepp, which opened in 1999, and is located at the VenusFort shopping mall. Other Zepp halls include the Nagoya Zepp, Osaka Zepp Namba, Osaka Zepp Bayside, Sapporo Zepp and the Fukuoka Zepp.

The 2013 Muse gig has been one of the most iconic Muse gigs as the setlist also included old songs which have not been played in years at that time. During the encore, the band were masked in their Panic Station costumes, accompanied by a group of people, also wearing costumes, including Tom Kirk and Tim Qualthrough, who filmed the encore. It took notoriously long for them to finally release it, being out in 2020 on YouTube, seven years after the gig.