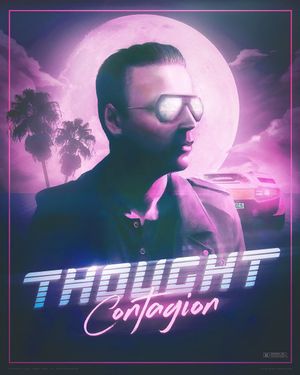 "Thought Contagion" is a single, released on 15th February 2018.

In an interview with Matt Wilkinson on Beats 1 Radio, Bellamy mentioned the idea behind the meaning came from a book by Richard Dawkins which suggested that thoughts are contagious and spread like a virus, or like genes.[2]

The song was inspired while watching American news stations in which some 'belief systems, whether they are true or false, are getting a lot of air time'. The song also deals with anxieties and feelings[2], the part of 'You’ve been bitten by a true believer' is about someone who believes things that are not true will sometimes have more power than you as Matt said: 'I think that’s really what the song is about. It’s about how other people’s false belief systems can infect your own and sometimes even affect your feelings.'[2]

Matt wrote the song towards the end of 2017, he came up with the bass line and used a theremin to create the lead melody, but is was until November 2017 when they started to record it when he thought that theremin melody would be a cool, anthemic sort of vocal part, Chris and Matt did about ten passes to create this sort of crowd effect on the vocal. The verse of the song, originally was more heavy-sounding than it is now, but they wanted to experiment with programming the verse and go for more of a slightly trap or 808 drum feel for the verses, which took the song in a bit of a different journey.[2]

The leaked version of the song started with sounds of thunder, similar to The Globalist.

During an interview with KROQ DJ Stryker at the 2017 Almost Acoustic Christmas show, Matthew Bellamy was asked about plans for 2018. He revealed that Muse is currently mixing new track[3]. On Twitter, Matt was asked about release date. He expects to make video on January, then release it along with new song on early February[4]. He also described it as Fury II[5].

On February 6, 2018 All Access Music Group posted "10 Questions with... Adan Armandariz", National Director/ Rock Promotions for Q Prime. In his answer to Question 6: he states:

"Along with the aforementioned Three Days Grace action, we have new music from Muse, "Thought Contagion", that hits PD desks everywhere on February 15th." See his interview here.

On February 9, 2018, Muse & Warner Brothers Promotions posted an image for Thought Contagion (see above) that looks like a movie poster. The license plate on the car has the number 02.15. The bottom of the image shows a Rating of R and "A Dig Down Production". The lettering is done in the same style as Dig Down, with similar neon colors.

On February 15, 2018, the song was leaked earlier than intended on a YouTube live-stream [6]

Written in A minor, the song starts with a heavily chromatic bassline, followed by a Halloween-esque riff and loud, thumping percussion. The verse is backed by clap drums and an almost-rapped Bellamy vocal, before the chorus presents a call-and-response hook, with Fall Out Boy-style "whoa-oh's" answered by a quiet falsetto.

Musically, the chord progression is similar to In Your World, but the song is also compared to Fury with its Digitech Whammy guitar solo and anti-religious lyrics. It makes reference to the "Final Solution," which was Nazi Germany's name for the planned extermination of Jews during World War II.

Thought Contagion, as the second single to be released off of new album, was performed live for the first time in 2018 at the Paris Cigale "by-request" show. It was received surprisingly positively by the crowd, dedicated fans who had traveled for miles to hear the band perform a setlist filled with songs such as Eternally Missed and Space Dementia live. Long-time fans and new fans tend to agree that Thought Contagion is a welcome addition to the live repertoire, a notable contrast to the controversial Dig Down, released the year prior.

Fall down, learn when to count it out Prop me up, before I black out Withdraw before you're out of time Clean slate and buried war crimes

Strung out, falling from the big time Welcome to the infinite black skies It's too late for a revolution Brace for the final solution