KUALA LUMPUR: After triumphing as the best live act at the recent Brit Awards – the British music industry’s version of the Grammies – rock trio Muse staged a storm at the Stadium Negara here last night.

Having played to sell-out crowds in Singapore and Jakarta en route to Malaysia, the band found the Asian fans “pretty cool.”

“It’s the first time we’re coming to this part of the world and it is very exciting for us,” front man Matthew Bellamy told reporters ahead of their one-night show here yesterday.

“We were very surprised by the enthusiasm of the crowd in Singapore and Jakarta. That was pretty cool,” he said. 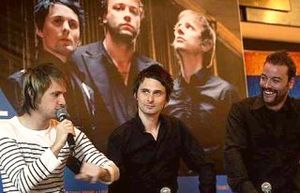 Showbiz lads: Muse speaking to reporters ahead of their live concert in Kuala Lumpur on Sunday.

They released their breakthrough debut Showbiz in 1999 and, in 2006, were voted the BBC’s favourite band.

The trio has been on tour since last year, promoting Black Holes and Revelations, which has sold over two million copies worldwide and spawned three hits so far – Supermassive Blackhole, Starlight and Knights of Cydonia.

“This album has taken us to new places, other than North America and Europe.

Their show here is part of the Muse World Tour 2007 Live.

Go back to The Star