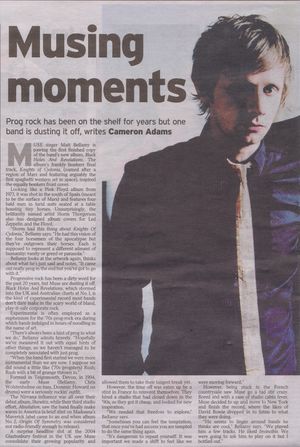 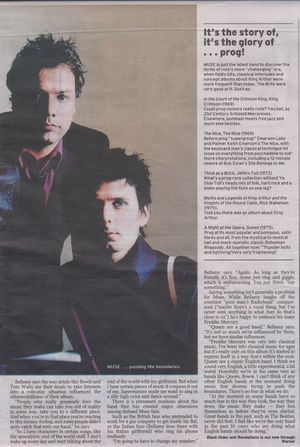 An article in the 24th August 2006 edition of The Courier-Mail.

Prog rock has been on the shelf for years but one band is dusting it off, writes Cameron Adams

Muse singer Matt Bellamy is pawing the first finished copy of the band's new album, Black Holes And Revelations. The album's frankly bonkers final track, Knights of Cydonia, (named after a region of Mars and featuring arguably the first spaghetti western set in space), inspired the equally bonkers front cover.
Looking like a Pink Floyd album from 1973, it was shot in the south of Spain (meant to be the surface of Mars) and features four bald men in lurid suits seated at a table housing tiny horses. Unsurprisingly, the brilliantly named artist Storm Thorgerson also has designed album covers for Led Zeppelin and the Floyd.
"Storm has this thing about Knights Of Cydonia," Bellamy says. "He had this vision of the four horsemen of the apocalypse but they've outgrown their horses. Each is supposed to represent a different ailment of humanity: vanity or greed or paranoia."
Bellamy looks at the artwork again, thinks about what he's just said and notes, "It came out really prog in the end but you've got to go with it."
Progressive rock has been a dirty word for the past 20 years, but Muse are dusting it off. Black Holes And Revelations, which stormed into the UK and Australian charts at No. 1, is the kind of experimental record most bands don't dare make in the scary world of bland, play-it-safe corporate rock.
Experimental is often employed as a euphemism for the '70s prog-rock era during which bands indulged in hours of noodling in the name of art.
"There's always been a hint of prog in what we do," Bellamy admits bravely. "Hopefully we've measured it out with equal hints of other things, so we haven't managed to be completely associated with just prog.
"When the band first started we were more instrumental than we are now. I suppose we did sound a little like ('70s progsters) Rush; Rush with a bit of grunge thrown in."
Formed in Teignmouth, Devon, in 1994, the early Muse (Bellamy, Chris Wolstenholme on bass, Dominic Howard on drums) were a seriously rockin' outfit.
The Nirvana influence was all over their debut album, Showbiz, while their third studio effort, Absolution, saw the band finally make waves in America (a brief stint on Madonna's Maverick label came to an end when album No. 2, Origin Of Symmetry was considered not radio-friendly enough to release).
A surprise headline slot at the 2004 Glastonbury festival in the UK saw Muse consolidate their growing popularity and allowed them to take their longest break yet.
However, the time off was eaten up by a stint in France to reinvent themselves. They hired a studio that had closed down in the '90s, so they got it cheap, and looked for new inspiration.
"We needed that freedom to explore," Bellamy says.
"Sometimes you can feel the temptation, that once you've had success you are tempted to do the same thing again.
"It's dangerous to repeat yourself. It was important we made a shift to feel like we were moving forward."
However, being stuck in the French countryside saw Muse go a tad stir crazy. Bored and with a case of studio cabin fever, Muse decided to up and move to New York and finish the record, where the likes of David Bowie dropped in to listen to what they were doing.
"Hw seems to linger around bands he thinks are cool," Bellamy says. "We played him a few tracks. He liked Invincible. We were going to ask him to play on it but I bottled out."

Bellamy says the way artists like Bowie and Tom Waits use their music to take listeners into a role-play situation influenced the otherworldliness of their album.
"People who really genuinely love the music they make can take you out of reality in some way, take you to a different place. And when you're in that place you're reacting to this intense feeling. and some people didn't quite catch that with out band," he says.
"So I have characters in certain songs, like the apocalyptic end of the world stuff. I don't wake up every day and start talking about the end of the world with my girlfriend. But when I hear certain pieces of music it conjures it out of me. Supermassive made me want to sing in a silly high voice and dance around."
There is a presumed madness about the band that has created major obsessions among diehard Muse fans.
Such as the British fans who pretended to work for a gas company to get inside his flat, or the Italian fans (Bellamy lives there with his Italian girlfriend) who ring his phone endlessly.
"I'm going to have to change my number,"

Muse is just the latest band to discover the thrills of rock's more challenging" era, when fiddly bits, classical interludes and concept albums about King Arthur were more frequent than today. The Brits were very good at it, Such as:

In the Court of the Crimson King, King Crimson (1969)
Could prog-rockers really rock? You bet, as 21st Century Schizoid Man proves. Elsewhere, bombast meets free jazz and much else besides.

The Nice, The Nice (1969)
Before prog "supergroup" Emerson Lake and Palmer Keith Emerson's The Nice, with the keyboard man's classical technique let loose on everything from psychedelia to out-there interpretations, including a 12-minute rework of Bob Dylan's She Belongs to Me.

Thick as a Brick, Jethro Tull (1972)
What's a prog-rock collection without Ye Olde Tull's heady mix of folk, hard rock and a bloke playing the flute on one leg?

Myths and Legends of King Arthur and the Knights of the Round Table, Rick Wakeman (1975).
Told you there was an album about King Arthur.

A Night at the Opera, Queen (1975).
Prog at its most popular and pompous, satin flares and all, from the mystical to musical hall and mock-operatic classic Bohemian Rhapsody. All together now: "Thunder bolts and lightning/Very very frightening!"

Bellamy says. "Again. As long as they're friendly it's fine. Some just ring and giggle, which is embarrassing. You just think, 'Say something'."
Saying something isn't generally a problem for Muse. While Bellamy laughs off the constant "poor man's Radiohead" comparisons ("maybe there's a vocal thing, but I've never seen anything in what they do that's close to us") he's happy to embrace his inner Freddie Mercury.
"Queen are a good band," Bellamy says. "It's not so much we're influenced by them, but we have similar influences.
"Freddie Mercury was very into classical music, I've been into classical music for ages but it's really only on this album it's started to express itself in a way that's within the rock. Queen are a classic English band. I think we sound very English, a little experimental, a bit weird. Hopefully we're in the same vein as bands like Queen, Bowie. I can't think of any other English bands at the moment doing music that diverse, trying to push the boundaries. There's no fear in what we do.
"At the moment so many bands have so much fear in the way they look, the way they dress, the music they make - they box themselves in before they've even started. Great bands in the past, such as The Beatles, never did that. I feel like we're the only band in the past 10 years who are doing what English bands should be doing."

Black Holes and Revelations is out now through Warner

Go back to The Courier-Mail