Difference between revisions of "Talk:Manson Guitars"

Perhaps something to do with the studio photographs posted on twitter. I don't know what to think, the twitter feed is linked to on Bare Knuckle Pickups' front-page, so the feed appears genuine. I can't imagine any motivation to fib, so unless it's a joke, I guess it could be true. Double-neck guitars would be a bit of a change, to say the least. Metal songs on the horizon? --Tene 11:28, 17 April 2010 (BST)

I was reading Matt's interview in Guitar Player mag and he said that the guitar he used most on the Resistance was called Black Ed. I was just wondering if anyone new if this was the 007 or the Black Midi? --Muserism 00:19, 17 June 2010 (BST) --- I'm sure it is Kaoss Manson, beacause it is used for the most songs of the 'black' guitars --IIIAliAsIII 17:00, 17 June 2010 (GMT) --- I read the article and I reckon it 007/Blackie, he mentions it had Fuzz Factory & Wah Probe etc, its the only guitar that has a Wah Probe --RustRelic It was the 007/Black Manson. Thats wat he said in an interview a while ago. Im sorry i dont have a link. --MuseIsAwesome13 02:14, 13 July 2010 (BST) --- OK it looks like Black Ed is Blackie. But - don't we agree it is the least used guitar not just in the Resistance era, but always... ? It is used for Starlight again and it was used for U2 and AC/DC cover, and for Uprising and Unnatural selection at the beginning of the tour - and that is pretty much it. For example.. even Glitterati is used more often than 007. But most used manson this year is definatly Kaoss. My guess is Matt was a little confused during that interview :) --IIIAliAsIII 12:28, 13 July 2010 (GMT) --- Another thing though, they use different guitars in studio than on tour. Maybe they just used 007 for recording but didn't like it's live sound. Cause he said he used it to record. --MuseIsAwesome13 15:44, 13 July 2010 (BST)

--- As stated in he magazine, he said it was used in studio but not live because it's too heavy and too loud to be played live comfortably PhiLam64 22:00 November 1, 2010 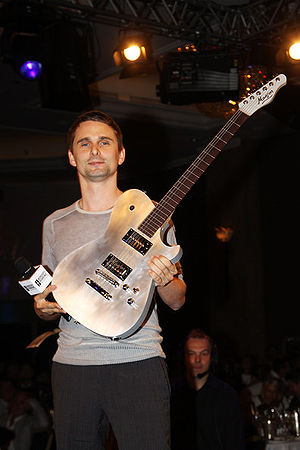 Matt showed this new guitar at Silver Clef Awards 2010... does anyone know something more?

Last change today, I think: appended names of guitars which only have a fun-dubbed name with a footnote symbol and added a matching footnote explaining that.

Kaoss Manson also needs a footnote symbol. It is not featured in the Muse gallery at the Mansons website and i believe it is called a Black Ed officialy (read the previous section). --IIIAliAsIII 17:21, 17 June 2010 (GMT)

Righto, footnote symbol added. Will sort out the Black Ed bit by citing that article, doing a bit of stats on black guitars used and adding a bit of rationale. Later though, not now :P --Tene 17:42, 17 June 2010 (BST)
OK :) and i've just found another one that is not featured at the Mansons and has unofficial name: Chrome Kaoss Manson. All the others are officialy named. --IIIAliAsIII 18:56, 17 June 2010 (GMT)

One thing I've noticed is that the Chrome Kaoss Manson keeps getting it's named changed to Mirror Kaoss. It keeps going back and forth between Chrome and Mirror. Can we make up our mind and just call it something? --MuseIsAwesome13 16:21, 28 June 2010 (BST)

In my opinion Mirror Kaoss is better name for it than Chrome. Because finish is the same as the Mirror Manson has. --IIIAliAsIII 17:42, 28 June 2010 (GMT)

If you go to the Manson Guitars website gallery and put the mouse over the pics of Matt's guitars it has what I think are Hugh's names for the guitar.

Could someone edit the links for the following guitars...

I see, so I guess the website has moved with no notice on the old one...and that Hugh Manson has learnt the spelling of "laser" :P --either that or whomever writes the website via their own volition.

Look like there's a new Manson Guitars website (http://mansons.co.uk/gallery/). In said gallery, it's not explicitly stated that any of the guitars belong to/were built for Matthew Bellamy, but the images match the previous ones. One problem we do have now, is that Red Glitter appears to have been renamed Red Sparkle, while another less sparkly, non-custom-built guitar is called Red Glitter. For the sake of collective sanity, let's just make an intuitive judgement that the new information is more accurate than the old, despite the new gallery not explicitly stating that they're the guitars we're interested in.

Who changed all the names of the guitars? I highly doubt the red glitter manson is named the Santa Manson (as cozy as that would be). On Manson's website it calls it 'Red Sparkle' ---PhiLam64 9 October

They are the official names which Matt calls his guitars. There is a picture of a setlist for Matt's tech which shows which guitars are used for which songs and what they should be tuned to in the NME 100 Page Icons Special. It should also be noted that the Silver/ Chrome Bomber and the Mirror Manson are not the names which Matt calls them, however the names are to hard to read from the picture of said setlist. Guitarcam

I sent an e-mail to Manson Guitars last week wrt official names, no reply as of yet. They don't seem to appreciate formal writing, nor Muse-related but not-official e-mail addresses...maybe I could do with a @muse.mu address ;) --Tene 14:10, 11 October 2010 (BST)

In the bottom left picture (Page 63), its the sheet of paper to the left of the acoustic guitar. The column that has the names of the guitars written has been cut off though in the scan because its so close to the edge of the page: http://erato1.files.wordpress.com/2010/05/nme-152.jpg

I was on tumblr and i found this picture: http://25.media.tumblr.com/tumblr_lbpz37BPty1qau3gno1_500.jpg Maybe its just a trick of the light or something but it looks almost bronze? i dunno.

i dont think its the mirror manson because the mirror doesnt have black pickups. http://en.wikipedia.org/wiki/File:Muse_melbourne28012010.jpg that has to be a new one. white/mirror/silver and black pickups. cant be old delorean or mirror.--User:Danooch

It is the mirror. The pickups look black in the picture probably due to the light. Look at the Manson Mirror page- the pick ups are chrome/silver. Plus, doing small comparisons, we can see that the guitars both in this picture and this one have the same layout in everything- same pickups, same knob layout etc. If anything has happened to the Mirror Manson than it has had new pickups, which I highly doubt as in all the pictures, the pickups are the same. --The Groove ---

Anyone know anything about this? http://www.mansons.co.uk/news/2010/62.html

They are a new pickup model designed by Hugh in collaboration with Bare Knuckle Pickups. All the info you need for them is right there on the page you linked to. What else did you want to know? ---

Looks like it is gloss black with MBK-2, Sustainer but no X-Y control pad. It also seems to have Matt's custom hardware.

I thought that it might be quite cool of there was a gallery for people to post their replica Mansons somewhere. Does anyone agree? If so, can someone set this page up? --SC-1 17:59, 28 November 2010 (GMT)

If I'm honest, I don't support this idea. It is just strange to me, that MuseWiki would share the info about who made the unofficial Manson replicas and showing them here. I don't see MuseWiki that way.
As example what I'm trying to say... it would be the same to me if someone suggested, that MuseWiki should have the 'Muse Covers' section where people could show ther interpetation of Muse songs. MuseWiki should not be exploited for such things. It is OK with me to show this kind of info in your profile page, but making it as a special section... No :)

Therefore I'm removing the Manson Replicas section from the Guitars. I would like to hear the opinions about this of the people who have the authority here, and others of course :) --IIIAliAsIII 15:19, 16 January 2011 (GMT)

If its a problem, I will happily back down! :D SC-1

When Has It Evar Been Called Troncasater?

Keytar is definitely different keytar (it can be proved by the Tims Stark photos on FB building new keytar). Since Matt has it, Keytarcaster serves him as a backup keytar. --IIIAliAsIII 09:51, 15 August 2011 (BST)

There is now a new Manson guitars website with a new gallery and better pics of all the guitars, However on the gallery there are separate sets of pictures for the Manson mirror and Manson earls court, Currently these are listed as the same guitar and the only visual difference is the pickup, is the earls court a different Guitar or the same one with a mississippi queen in the bridge?

Should we wait to create a page for this [1] new Manson til Manson guitars anncounces pictures with detail of this new guitar inclusive the name of it.

Update: Just thought again about the guitar, could be that this isn't a new one.. Could be the original Matt Black... We'll see

I believe that big thing on the bridge is Hammer Jammer (could be used for the name too, if it is new guitar :). Found this video on YT: https://www.youtube.com/watch?v=HyzuzvWme_Y IIIAliAsIII (talk) 09:32, 6 November 2014 (GMT)

It definitely looks like a hammer jammer in silver/white to me. I think it is just that on his older matte guitar. - KeTeVemCovers (talk)

So we've got two new ones, like always i'd say we wait with new pages til the names are announced on the offical Manson page or gallery...

Just wondering what people's thoughts were on this - personally, as the new guitar has a more coppery colour than the old Rust Relic and a shape that suggests lineage with Bomber and Chrome Bomber, I wondered if the portmanteau name "Rust Bomber" or the more descriptive "Copper Bomber" might be a better way to phrase it? Personally, I'm more drawn to Rust Bomber, as it'd be the third in the Bomber series to be used live and I think that's a better way to describe it. What do people think?

Ulisun (talk) 5:52 pm March 17, 2015 (GMT) I think Copper Bomber is the most proper name. From the instagram photos and live videos on Youtube, the guitar finish looks like a 'copper' not the rust. The surface of the guitar seems smooth, not like a rusty or rough thing. 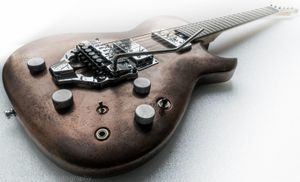