System of a Down 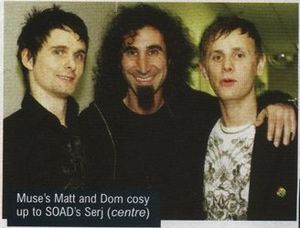 Matt and Dom with Serj from SOAD

System of a Down is an alternative heavy metal band from Los Angeles, California. They use a wide range of instruments, including baritone electric guitars, electric mandolins, sitars, 12-string classical guitars, and many other West Asian instruments. Their main influences are most noticeably from earlier alternative rock bands. They also draw influence from the heavy metal, punk rock, jazz, jazz fusion, Armenian folk music, classic rock, blues, and industrial genres. Some bands that System are influenced of: Black Sabbath, Slayer, Snot, etc. They have influenced enough bands like Muse (Bellamy once stated that the riff to Stockholm Syndrome was influenced by SOAD[1]) and other bands that are signed to Serj's label, Serjical Strike, as their style is unique and includes many techniques and bizzare phonetics. Upon meeting Muse, Serj offered to sign them to his record label, which they declined. He also nominated their album Absolution for the Shortlist Award in 2004, proving a mutual appreciation and possible influence between both bands.

Tom Morello has cooperated with Serj in a project called Axis of Justice.