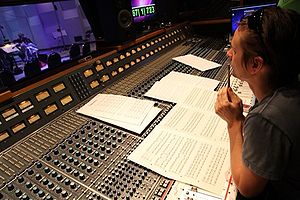 'Supremacy' sees the band going to "absurd levels", according to Matt. Spiralling swamp blues of the track builds to a climax of orchestral hysteria as Matt orates a terrifying scene of mankind losing its supremacy over the Earth as "the seas have risen up" and energy shortages cause global desperation.[1]

According to a French magazine, Jeuxactu, the song is abit like "Kashmir" from Led Zeppelin with it's guitar riff and symphonic orchestration.[2]

On March 30th 2012, a rumour started on-line, spreading through most of the social networks like twitter and facebook and, naturally, most Muse forums and fan-pages. Apparently, an excerpt of Supremacy had been leaked, revealing roughly 30 seconds of the song. The vocal version can be found here [1]. On April 1st 2012, the leak was confirmed to be fake, an April Fool's Day joke organised by Facebook page Coro Happy B-Day M. [3]