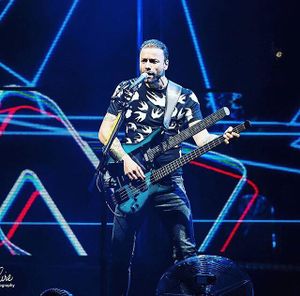 Much like the original Status Kitara Doubleneck Bass, this Bass is incredibly unique in that the top half of the bass is a Misa Kitara, cut to fit the wood frame, and the bottom half is a Status S2-Classic headless. The bass is likely tuned to EADG standard.

During the Drones tour, the Kitara system had to be completely rebuilt due to the large amounts of failing as the Misa Kitara is not an instrument built for heavy turing. The screen was replaced with an iPad, which is controlling a synthesizer via midi and the plastic Kitara neck was replaced with a wooden neck, encapsulated by plastic a shell, with buttons laid over the wood.