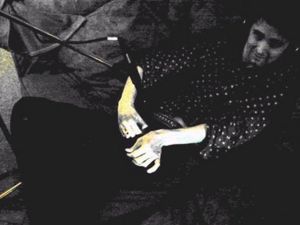 Space dementia is a hypothetical mental condition in popular science fiction astronauts are said to sometimes experience when they're in space. This can be contributed towards feelings of insignificance, insecurity lack of social contact and awareness of total isolation from the human race. A Rachmaninov-inspired song that starts with a piano introduction and heads into a heavy verse, with hammering piano and bass, the chorus is introduced by a looping synth keyboard, followed by a delicate vocal show, before hammering piano introduces the next verse. However, the chorus vocal line (from "... and tear us apart", until the end of the chorus) and chords are an exact reduction of part of Rachmaninov's Second Piano Concerto 1st Movement at about 1:30. The song is finished with an elaborate extended chorus, then a heavy codus at about 5:30, incorporating phase effects, piano, guitar, and distorted bass and contains sound of Matt's fly being zipped and unzipped.

"Space Dementia is the term NASA Used for what happens if you're left out in space for a long time, because if you truly conceptualise the situation of being there and looking back at Earth, it can drive you mad, The song's about a person who's quite important in my life and who gives me space dementia when I look at them. It's about being intensely engrossed so that you become obsessive and almost nasty"[1]

Space Dementia is a piano-driven rock song, with elements of classical music, electronic rock and heavy rock/metal. Composed in E minor, it starts at a very slow tempo of 62 bpm, which increases to 85 bpm for the majority of the song. The outro contains a sudden shift from piano to heavy, distorted guitars, and is played in 6/8 time at 114 bpm.

Bellamy's vocal range in the song spans from F♯3 to D5.

When Muse first demoed the song for John Leckie, the piano was so overpowered by the bass and drums Leckie had to put his head in the piano whilst Matt played[2]

"Space Dementia" was originally intended to be the final song in Origin of Symmetry. The heavy guitar outro section was recorded seperately and intended to contrast the piano. The band originally wanted to increase the low-frequency sounds at the end below the levels of human hearing to an illegal level.[3]

A comment from Matt detailed the meaning of 'H8' in a 2003 interview: "Using a microcomputer (Hitachi H8 / 3048F) which can be built into the industrial machines, you can learn and understand the inputs /outputs of the microcomputer as a basis of robot control and conduct the experiments by C-language for steppingmotor control, servomotor control (PWM control) and serial communication. H8 model, a 16-bit microcomputer consists of 32-bit registers, has a flash ROM of 128KB, a RAM of 4KB (SRAM) with external extension of 128KB and 78 I/O terminals with the built-in A/D and D/Aconverters. H8 is a microcomputer usually built into a TV, VTR, mobile-phone and car navigator. Since it has ample I/O terminals, H8 microcomputer is also used as a brain of a small robot."[4]

For the lyrics of "Space Dementia" in the sleeve notes of Origin of Symmetry, 'H8' is mistakenly printed as 'Height'.

Starting at the Southside Festival on June the 24th 2006, the Space Dementia ending was used as an outro for "Knights of Cydonia". The playing of this outro was ceased between sometime in 2007 (still used as late as April 2007) but was used for most gigs until mid-November 2006.

After being performed last in 2005, the full song made a return to the live setlist at Monterrey Arena 16th July 2008 and, as the rest of "Origin of Symmetry", was played at Reading and Leeds 2011, and then returned once again seven years later at the by request gig Paris Cigale 2018 after being the third most voted song by ticket holders[5].

Mmmm, yeah You'll make us wanna die I'd cut your name in my heart We'll destroy this world for you I know you want me to Feel your pain

Go back to Origin of Symmetry