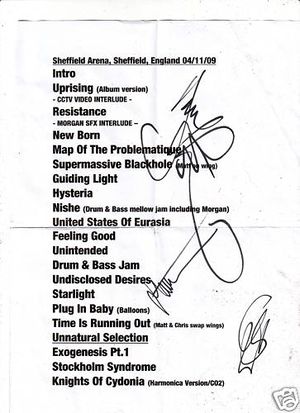 This concert was part of the European leg of "The Resistance" tour, announced on the 1st of June with general ticket sale starting on the 5th thereof,[1] at 09:00.[2] Fan pre-sale was sent out during the evening of 3rd June featuring links for the pre-sale commencing at 9:00 the following morning. Pre-sale tickets completely sold out for all UK dates in ~35 minutes.[source?]

On playing songs from "The Resistance" live, Dominic Howard stated that learning to do so "should take a while!"[4] and Rehearsals started on the 19th of July.[5] On the 22nd, musewire readers were told to "expect an 8" stone 'enge" for The Resistance tour's stage design.[6]

The balloons were released during Plug In Baby. Afterwards, the band played Burning Bridges whilst waiting for the final balloons to be popped. Bellamy used his Manson Mirror Kaoss for Hysteria.

Matt Bellamy stated after the gig in a Q Magazine interview that it was the best thing that had happened to the band this century. [1]