This page will serve as a running commentary on Muse's next major release. 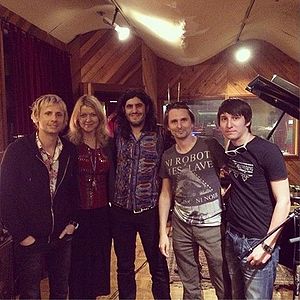 In a interview at Pure FM, the broadcaster said that Matt has been rehearsing a new "riff", and asked to Dom if that "means that a new single will be released sometime soon before the new album", to which replied Dom saying that they are not going to release something brand new this year 2013 and that they are going to be back into the studio in 2014 to record their seventh album. [3]

After playing Agitated and Yes Please at Helsinki Olympiastadion Matt said; "We haven't played those songs in like 6 years... Something like that. That was a rehearsal. That's what the next album sounds like, okay?"[4] Matt said to Billboard after the iHeartRadio gig, that they are going to play in few festivals because they will be recording the seventh album in 2014 he said: "At the moment I’ve got lots of vague ideas, but writing on the road always tends to sound like what you’re touring at that point so I try to wait until we’re away from that. There might be one or two special festivals. Maybe one in America and just one in Europe. The idea is to make an album next year." [5] Matt also said at the Green Room Interview at iHeartRadio: "This most recent album is quite electronic in sound, the album before is very progressive and have a lot of classical music on it, I think the next album we might return to more so straight rock sound, kinda sounding to early albums I think"[6].

In November 2013, Matt met Rich Costey; Since The Resistance Muse has self produced their own work, this suggests that maybe a "Producer" can come back. 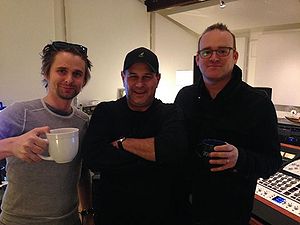 In fall of 2013, Matt said that the album maybe could be a "conceptual album" but because the music industry is moving so fast, they don't know how it will end and that in early 2015 they could be releasing the new album. According to Matt, the new album will have more "rock" focusing more in traditional instruments (Guitar, Bass and Drums) [7]

An article published by NME on 16th December 2013 suggested that the new album could be ready by early 2015. "I've written some good tracks, actually" Bellamy told Triple J. "We haven't had a chance to rehearse them out yet. We'll take a break next year for a little few months and then we'll get in the studio. If it all goes very well, the new album could well be early 2015 or late 2015. Christmas 2014 might be [when we release] our next single." Bellamy said he wants to "reconnect" with the oldest elements of Muse and that he is keen to experiment less on the new songs. "I've got a pretty good picture of what I'd like the next album to be like," he said. "It's the comedown and the sort of waking up the next day being like, 'What the fuck? What the fuck? That was crazy'...I kind of feel like it will be nice to reconnect and remind ourselves of just the basics of who we are." He continued: "I have this strong feeling that the next album should be something that really does strip away the additional things that we've experimented with on the last two albums, which is electronics, symphonics and orchestral work and all that kind of stuff."

According to Matt Bellamy on the new record, he published in a tweet, that the wanted to talk about "Deep Ecology", "the Empathy Gap" and "World War III".[8]

On the 22nd of February, Dom updated his Twitter bio to "Raring to go on album no 7..", suggesting studio time was imminent. On the 8th of March, an Instagram photo was posted, with a description saying that Muse had started writing for their next album and that they were working at 4th Street Recording Studios[9]

However, interviews with the band during April revealed that they had not yet started recording anything for the album. Howard stated, "We're going to start this year. [Coachella] is our last two gigs, then we're completely done for touring this album. We're going to go back in May and start working on some new stuff, so I think we'll start making it this year. If we can get something out this year, that would be great, but definitely next year."

By the end of May, fans who spoke to the band revealed that they still hadn't started recording material.

On 3rd September, a tweet by @JAiggins showed a couple of Muse flight cases, accompanied by the message "Not a bad way to spend a evening working@AIRStudios @muse". It was assumed recording had begun at AIR studios in Hampstead, London, however it was later confirmed by @JAiggins that they were only rehearsing, not recording.

A Twitter used, @zzzJustinS met the band after a Royal Blood concert. Dom Howard told him that they had finished writing all the songs for the new album, and they will enter a studio in Vancouver to begin recording next week. The band subsequently began preparing to record on the 3rd October. Dom informed fans by uploading a picture to his Instagram account accompanied by the caption "The set up has started!".

On the 3rd/4th of October (time differences cause discrepancies) the official Muse Instagram account uploaded a picture of the band playing/recording in Studio 2 at The Warehouse Studio in Vancouver Canada.

As of 18th of October, Muse took a break from recording, and will be returning in The Warehouse Studio in Vancouver in November.