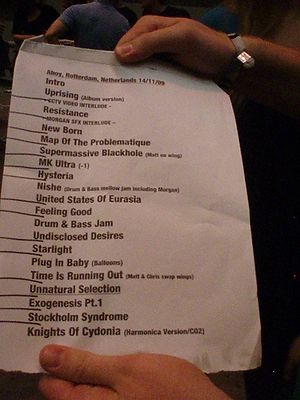 This concert was part of the European leg of "The Resistance" tour, announced on the 1st of June.[1] Fan pre-sale information and links were announced on the 3rd of June.[5] Pre-sale took place on the 11th-12th[5] and general sale started on the 13th.[1]

Unusually, there were no additional riffs played after the end of New Born.

Matt forgot (or decided) not play the guitar during the second verse of Starlight.

After Knights of Cydonia Howard said: "Thank you Rotterdam, you guys rock, it's for sure now!"