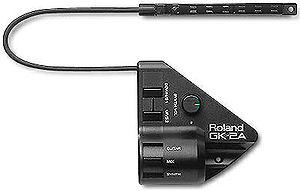 The Roland GK-2A is a hexaphonic pickup/synth driver, designed to drive Roland guitar synths. It consists of six tiny pickups (one for each guitar string) and an on-board synth module, and sends six parallel analogue signals to an apropriate receiver, using the 13-pin 'GK' cable. The GK-2A can be connected to Roland's GK devices like VG-88, VG-8, GR-33, GR-30, GI-10, BOSS Twin Pedals and other 13-pin compatible products.

The GK-2A is often refered to as a 'MIDI pickup' - this is partialy true, as it does transmit patch-change and volume-control MIDI signals. However, the guitar signal itself is analogue, not MIDI; it requires an external processing unit (such as the Roland GI-20P) to be converted to MIDI.

Apart from the standard GK-2A with external cables, an internal GK-2A also existed, mostly known for coming built into the Roland GC-10 MIDI guitar, sold in Japan. Using the same GK-2A divided pickup, the GK-2A from the GC-10 differs from the standard GK-2A pickup in that it can also be connected to the GI-10 guitar to MIDI interface and utilised to control virtual instruments in the computer. The internal GK-2A also allowed for a cleaner setup with no external modules or cables on the guitar itself.

Matthew Bellamy had the GK-2A installed on top of the Parker Fly and the two Gibson SG's. The internal GK-2A was installed on the Yamaha Pacifica 120, the Gibson Les Paul DC, the Peavey EVH Wolfgang, the Gretsch G1627 Synchromatic Sparkle Jet, aswell as two Manson guitars; the Deloeran and the Laser. The GK-2A was used with the Roland VG-8 V-Guitar System.