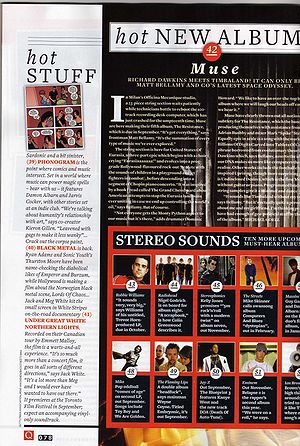 RICHARD DAWKINS MEETS TIMBALAND? IT CAN ONLY BE MATT BELLAMY AND CO'S LATEST SPACE ODYSSEY

In Milan's Officina Mecanique studio, a 23-piece string section waits patiently while technicians battle to reboot the 100-track recording desk computer, which has just crashed for the umpteenth time. Muse are here making their fifth album, The Resistance, which is due in September. "It's got everything", says frontman Matt Bellamy. "It's the summation of every type of music we've ever explored."
The string section is here for United States Of Eurasia, a three-part epic which begins with a crowd crying "Eurasiaaaaaaa!" and evolves into a prog-grade Bollywood-flavoured rock-out (replete with the sounds of children in a playground and jet fighters in combat), before descending into a segment of Chopin piano concerto. "It was inspired by a book I read called The Grand Chessboard about American attempts to stop the Eurasia landmass ever uniting in case we end up controlling the world's oil," says Bellamy. But of course.
"Not everyone gets the Monty Python aspect to our music but it's there," adds drummer Dominic Howard. "We like to have an over-the-top bit in each album where we will laugh our heads off each time we hear it."
Muse have clearly thrown out all notions of subtlety for The Resistance which the band are producing themselves with assistance from Adrian Bushby and mixer Mark "Spike" Stent. Equally epic in scale is a song with the working title Billions of Digits Carved Into Tablets of Crystal, a phrase borrowed from evolutionary theorist Richard Dawkins which, says Bellamy, asserts the idea our DNA makes us more like computers than we realise. Other works include the football chanting inspired Uprising", though more surprising perhaps is Undisclosed Desires, which is the first Muse song without guitar or piano. Programmed beats and string samples give it a minimal and dance-y feel.
"It sounds like Timbaland without my vocals" says Bellamy. "But it's actually quite a personal song about me and my girlfriend. I'm thinking people have had enough of geo-political stuff by the of the album.