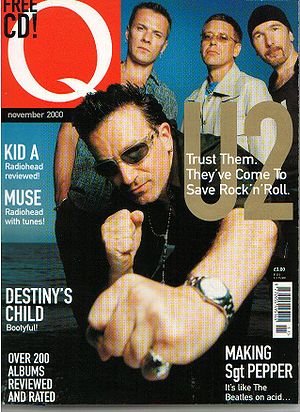 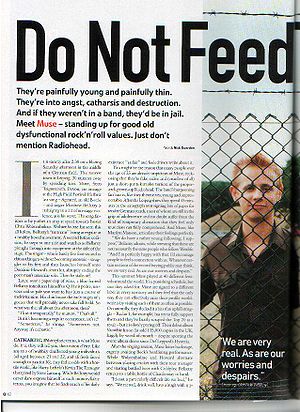 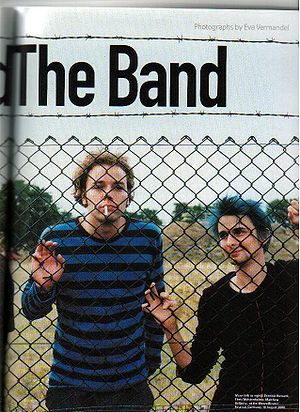 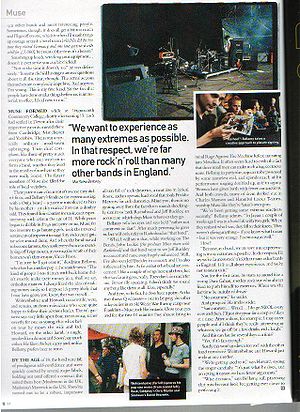 An article in the November 2000 issue of Q, pages 62 to 64. If the article is truthful, the interview took place on the 19th of August.

Do Not Feed The Band

They're painfully young and painfully thin. They're into angst, catharsis and destruction. And if they weren't in a band, they'd be in jail. Meet Muse - standing up for good old dysfunctional rock'n'roll values. Just don't mention Radiohead.

It is shortly after 2.30 on a blazing Saturday afternoon in the middle of a German field. The nearest town is Leipzig, 30 minutes away by speeding taxi. Muse, from Teignmouth, Devon, are onstage at the High Field Festival. It's their last song - Agitated, an old B-side - and their singer Matthew Bellamy is indulging in a bit of on-stage violence, as is his wont. The song finishes as he pushes an amp at speed towards bassist Chris Wolstenholme. Wolstenholme has seen this all before, Bellamy's "tantrums" being as regular as a healthy bowel movement. A second before collision, he steps to one side and watches as Bellamy ploughs through into equipment at the side of the stage. The singer - who is barely five foot six and as thin as thin gets without becoming anorexic - struggles to his feet and then launches himself onto Dominic Howard's drum kit, abruptly ending the poor man's muscular solo. Then he stalks off.
Later, over a paper cup of wine, a blue-haired Bellamy introduces himself to Q. He is polite, nervous and so pale you want to buy him a course of multivitamins. His chin bares the early stages of a goatee that will probably never take full hold. So what was that all about this afternoon, then?
"I lost it temporarily," he mutters. "That's all."
But it's becoming a regular occurrence, isn't it?
"Sometimes," he shrugs. "Sometimes not. Anyway, it's cathartic".

CATHARTIC, IN simplistic terms, is what Muse do. It is, they will tell you, their raison d'etre. Like any trio of healthily disaffected young individuals (all aged between 21 ans 22, and all fresh faced enough to pass for 16), they feel at odds with a hostile world, like Harry Erfield's Kevin The Teenager therapized by Steve Lamacq. While Bellamy would never dare express himself in such monosyllabic terms, you imagine that he finds much of his daily existence "unfair" and feels driven white about it.
This might be the reason that many people over the age of 25 are already suspicious of Muse, reckoning that they're fale, naive and (cruellest of all) just a short-parts karaoke version of the proper-and-grown-up Radiohead. The band's burgeoning fan base is, like they themselves, young and impressionable. After the Leipzig show they spend 45 minutes in the autograph tent signing bits of paper for tender German youth, most of whom are still in the grip of adolescence and no doubt suffer from the kind of temporary alienation that they feel only musicians can fully comprehend. And Muse, like Marilyn Manson, articulate their feelings perfectly.
We do have a rather young following, I suppose," Bellamy admits, while stressing that these are not necessarily the same people who follow Westlife. "And I'm perfectly happy with that, I'd encourage people to feel a connection with us. Whatever certain sections of the record buying public may think, we are very real. As are our worries and despairs."
This summer Muse played at 40 different festivals around the world. It's a punishing schedule, but one they asked for. Muse are signed to a different label in every territory and they feel that the only way they can effectively raise their profile worldwide is by visiting each of them as often as possible. Occasionally, they do find it a bit of an uphill struggle - Radio 1, for example, has yet to fully support them and they've barely scraped the Top 20 as a result - but it is slowly paying off. Their debut album Showbiz has so far sold 115,000 copies in the UK, largely by word-of-mouth - despite sporting the worst album sleeve since Def Leppard's Hysteria.
After the singing session, Muse loiter backstage, eagerly awaiting Beck's headlining performance. While Wolstenholme and Howard alternate between playing cricket with their tour manager and sharing bottled beer with Coldplay, Bellamy retreats to a table, bottle of Chardonnay in hand.
"It's not a particularly difficult life we lead," he says. "We eat well, drink well, have a laugh with other bands and meet interesting people. Sometimes, though, it does all get a bit too much and I'll go off on one, which is when I'll smash things up onstage or trash a hotel room [which he did the last time they visited Germany, and was later presented with a bill for £3,000], but most of the time, it's a breeze."
Smashing up hotels, wrecking your equipment... doesn't it ever strike you as a bit cliched?
"Not at the time it doesn't, no." he says defensively. "It seems cliched having to answer questions about it all the time, though. The actual actions themselves are completely impulsive. And anyway, I'm young. This is my first band. So the fact that people have done similar things before me is immaterial, in effect. It's all new to me."

MUSE FORMED while at Teignmouth Community College, shortly after turning 15. Each had settled in Devon after their respective parents moved there from Cambridge, Manchester and Yorkshire. Theirs was a typically ordinary small-town upbringing. Their chief complaint, like those of pretty much everyone who ever went on to form a band, was that they lived in the middle of nowhere so they were really bored. The future members of Muse also filled the role of local weirdoes.
Their parents came from out of town so they did not fit in, and Bellamy's fondness for experimenting with a Ouija board - a pastime introduced to him by his mother - quickly marked him out as doubly odd. They found their salvation in music, each experimenting with it from the age of 11. While peers began to dabble in drugs and petty crime, Muse, far too insecure to go hunting girls, took the universal sentiments of impotent teenage fury and created guitar solos around them. And when the band started to become famous, they took every chance to roundly slag off Teignmouth, incurring the wrath of their hometown's then-mayor, Vince Fusco.
"I'm sure he'll get over it," deadpans Bellamy, who then has another pop at the seaside town. "The kind of people I was friends with back home didn't exactly make their money in a, shall we say, orthodox manner. I always liked the idea of making money easily, so I suppose it's pretty likely that I may have gone, you know, that way myself..."
Wolstenholme and Howard, meanwhile, were and remain, studious individuals who seem quite happy to follow their obvious leader. The tall guitarist says very little apart from mentioning, rather sweetly for one so young, that when he's on tour he misses the wife and kid. Howard, on the other hand, is single, smokes like a demon and doesn't say much either. He likes chicken curry and, unlike Bellamy, prefers beer to wine.

BY THE AGE of 18, the band were full of prodigious self-confidence and were quickly courted by several major labels, holding out until offered a contract that suited them best (Mushroom in the UK, Madonna's Maverick in the US), Showbiz turned out to be a robust, impressive album full of rock theatrics, a neat line in lyrical doom, and an operatic lead vocal that rivals Freddie Mercury for arch dramatics. Mind you, there is no getting away from the fact that it sounds shockingly similar to both Radiohead and Jeff Buckley, and accusation which dogs Muse wherever they go.
Bellamy rolls his eyes and says he'd "rather not comment on that". After much pestering he gives in, but will only refer to Readiohead as "that band".
What I will says is that, while working on The Bends, John Leckie [the producer Muse share with Radiohead] and that band went to see Jeff Buckley in concert and came away hugely influenced. Well, I've also seen Jeff Buckley in concert, and I'm also influenced by him. As far as that other band are concerned, I like a couple of songs here and there, but that's as far as it goes, really. They don't do much for me. Personally speaking, I don't think we sound anything like them at all. Live, especially."
And here, to be fair, he does have a point. At the two shows Q witnesses - one in Leipzig, the other a day earlier in an old World War II [?] camp near Frankfurt - Muse rock like bastards. Close your eyes and for the first 10 minutes they almost bring to mind Rage Against The Machine before mutating into Metallica. It often seems hard to credit the fact that three small men can make such a big, corrosive noise. Bellamy, in particular, appears to be possessed by some nameless evil, and spends much of his performance singing doubled up, as if in agony. Women have given brith with fewer contractions. And both crowds, many of them decked out in Charles Manson and Hannibal Lecter T-shirts, worship Muse like they're Satan's own goat.
"We've been getting some extreme reactions recently," Bellamy admits. "In Japan a couple of weeks ago I was in a hotel lift with two girls. When they realised who I was, they feel on their knees. They weren't offering anything - if you know what I mean - but it was very strange. Fascinating as well."
How?
"Because, as a band, we are very into experimenting as many extremes as possible. In that respect, I'd say we're far more rock'n'roll than many other bands in England. Life is all about experience, and we're not resistant to it."
Not for the first time, he starts to sound like a young Dave Gahan, another rock star who always like to push himself to extremes. When was the last time he mainlined drugs?
"No comment," he smiles.
And groupes? He smiles wider.
"Same answer... Weeell... I do go AWOL every now and then. I'll just disappear for a couple of days at a time. After a show, for example, I may meet people and think they're really interesting or whatever, we go off for a few drinks and a laugh."
And this can last for several days at a time?
"Yes, if it's fun enough."
Surely this won't go down too well with the other band members? Wolstenholme and Howard just smile at one another.
"We're getting used to it," says Howard, eying the singer carefully. "It's just what he does, and accepting it means we have fewer arguments."
"Wise decision," says Bellamy, still practicing that mischievous look but getting ever closer to perfecting it.