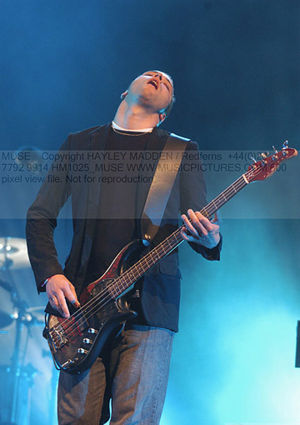 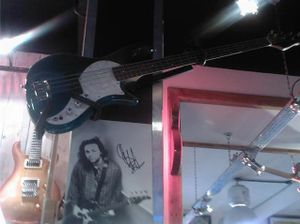 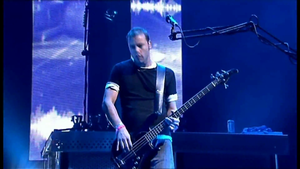 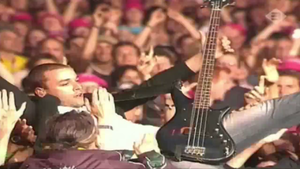 The front strap pin indicates that the pin was broken 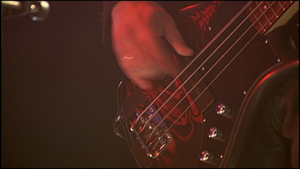 After using Pedullas for 5 years for live performances, when the Black Holes and Revelation Tour started, he swapped from Pedullas to Fender Jazz Basses.

One of Wolstenholme's Pedulla RB4 is exposed in the Manson Shop above Bellamy's M1D1 Mirror.

This bass was used to record Origin Of Symmetry & was used at some gigs in 2001 and used on the plug in Baby promo vid, he bought it for £1300 before being sold as a Part-ex in Mansons. Chris preferred the sound of the single soapbar Rapture & since then, has only used single pickup Raptures.

Used from 2001 after Chris had sold the blue dual pickup Rapture. Can be seen on the Hullabaloo DVD for songs in standard tuning. This bass was also used for live performances of Space Dementia in 2004 & Micro Cuts at some some gigs in 2007. It was also tested in studio whilst recording Undisclosed Desires to try find the best slap sound.

Used for songs in dropped-D tuning between 2001 & 2004, can be seen on the Hullabaloo DVD. While playing Stockholm Syndrome in Trabendo, France in 2003, a straplock broke causing Chris to play the remainder of the song while trying to hold the bass up. After Bellamy had thrashed Howard's kit, Chris held the bass over his head & launched it onto the drum riser. The bass landed on the head, possibly cracking it and 1st string peg. He made a new hole for the 1st string peg since the old one was useless. This makes this bass suspected as 5 string Pedulla. But, it's too strange for a 5-string bass (note the bridge, PU dimension, string spacing, and nut width).

This bass was used for all songs in standard tuning between 2002 & 2005. At the end of 2003, Chris sprayed the white pickguard flat black & after a while sprayed the whole body flat black, except for a design believed to be a Dragon, which was left red. Chris also used this bass briefly in 2006 for the Shepherds Bush gig for 2 songs, Stockholm Syndrome and Butterflies and Hurricanes, possibly because of the fast-paced finger picking in both songs, Chris was more comfortable with the usual feel of the Rapture.

Go back to bass