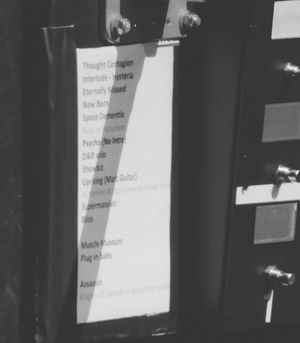 Muse are pleased to announce a special ‘By Request’ show in Paris, France at La Cigale on 24 February.

The show will be streamed live on the band’s social channels (Facebook, Twitter/Periscope and YouTube) and include real time fan voting. Ticket holders can choose their Top 5 tracks and all votes submitted with be collated and used to curate the set on the night.

Tickets will be available 17 February (tomorrow) at 10am CET. In an effort to combat touts there is a two ticket limit. In addition, names will be printed on all tickets & you must show matching valid government identification to enter the venue. Name changes on tickets are prohibited.

Just like with the previous By Request gig, the ticket holders were able to vote for their songs on SetTheSet, albeit the selection of songs available and amount of songs has been decreased. Some songs like Stockholm Syndrome, Fury, Citizen Erased and more did not appear in the voting options. The voting ran from February 17th 14:00 (CET) till February 20th 24:00 (CET).

On the gig date, Muse ask fans on Facebook three questions about which song could they play:

Right after the gig, Matt tweeted out the results of the voting:

While Matt did tweet the position Muscle Museum is, he didn't give the number of votes it got.