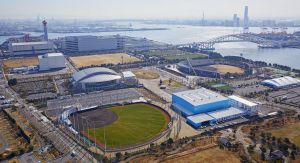 The Maishima Sports Island is a man-made island, located in Osaka Bay, in Japan. The island is, as the name suggests, used as the site of a sports complex, including a variety of sports facilities; a football training ground used by the Cerreso Osaka football team, the Maishima Arena with it's indoor athletic field and the Seaside Tennis Garden tennis center. The complex also includes a baseball practice court together with a baseball stadium, with the capacity of around 30.000. The island was created in the bid to host the Olympic Games in 2008, which Tokyo lost to Beijing.

The island also doubles as a resort place, housing a hotel, the Lodge Maishima, containing accomodation and meeting facilities, an auto camp called Maishima Urban Auto Village and the so-called Shin-Yuhigaoka observation palace and the Maihama Shore beach. The island also houses a Maishima Pottery Village, which houses a pottery museum and workshops. The Maishima Incineration Plant, famous tourist spot for it's architecture, is also located on the island.

Ever since 2007, the Osaka edition of the Summer Sonic Festival is held at the island, with stages, accomodation and bar/lounge areas extending over the majority of the island, after being relocated from the former WTC Open-Air Stadium, located in the center of Osaka.